A winter walk reveals things that might be missed during the growing season, when leaves densely cover the trees.  The fruits of Hoptrees (Ptelea trifoliata), or Wafer-ash, are among those potentially hidden treasures, hanging in clusters like seasonal ornaments from otherwise bare branches throughout the late fall and winter months.  The fruits are samaras, a type of dry fruit (not fleshy like a berry), each with a single seed encased in a papery covering with a winged edge surrounding the seed, designed to help the wind disperse it. 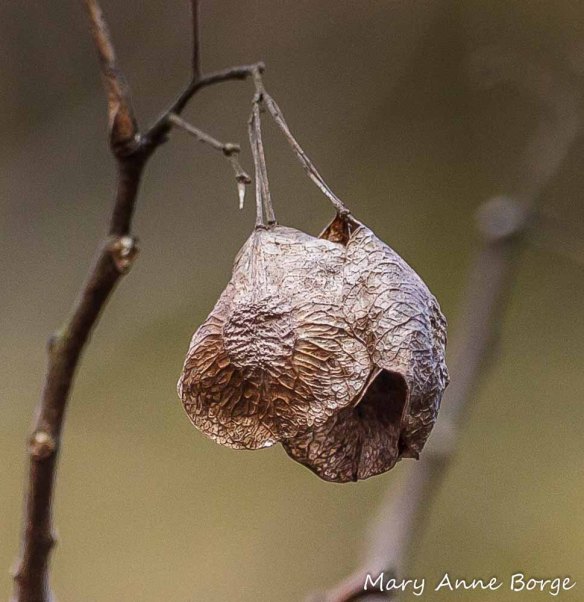 Many of the Hoptree’s aliases refer to these fruits.  The common name ‘Hoptree’ is a nod to the use of the fruits as a substitute for hops in brewing beer.  Another common name for this small tree or shrub is ‘Wafer-ash’, a name that refers to the wafer-like shape of the samaras.  Female ash trees also display clusters of fruits through late fall, although ash samaras are shaped like a paddle.  Hoptree samaras look more like the samaras of elm trees, a resemblance that is reflected in its genus, ptelea, which means elm tree.

In spite of these superficial similarities to elm and ash trees, Hoptrees are not related to either.  The Hoptree is a member of the Rue (Rutaceae) family, which also encompasses the genus citrus.  Because of this, the Rue family is often called the Citrus family.

Like many plant species, Hoptrees produce chemicals to protect themselves from being eaten by foraging animals.  All parts of the plant, including leaves, branches and twigs, have glands that release volatile oils when crushed, spraying a light mist on any critter naive enough to browse them, much like the mist produced when pealing a citrus fruit.  Fragrant and bitter chemical compounds are discharged, discouraging most potential consumers.  For good measure, this spray also contains chemicals that irritate the skin and make it photosensitive.  Altogether, it makes for an effective package of deterrents.  This is not a plant that is likely to be browsed by deer.

But there are a few insects that have evolved to be able to consume these leaves, synthesizing the deterrent chemical compounds in their bodies.  These sequestered chemicals help protect the insects from being eaten by other animals.  The Giant Swallowtail butterfly is one of the few insect species that uses this and other Rue family members as food plants for their caterpillars.

Attacks on Hoptrees by insects or fungi prompt the production of phytoalexins, which are additional protective compounds that have antimicrobial and antifungal properties.

Hoptrees produce many chemical compounds that have powerful medicinal uses.  Some Native American tribes, including the Menominees, used Hoptree constituents as a general health panacea or tonic.  The Hoptree, like ginseng, is one of a small number of plant species that are believed to be effective in improving the functioning of the human body as a whole.  Hoptrees have also been found to have properties that make other medicines more effective.

Hoptree flowers bloom in mid-spring, typically May.  The flowers are very fragrant, attracting many insect visitors to drink their nectar and potentially assist in pollination, including bees, butterflies, flies and wasps. 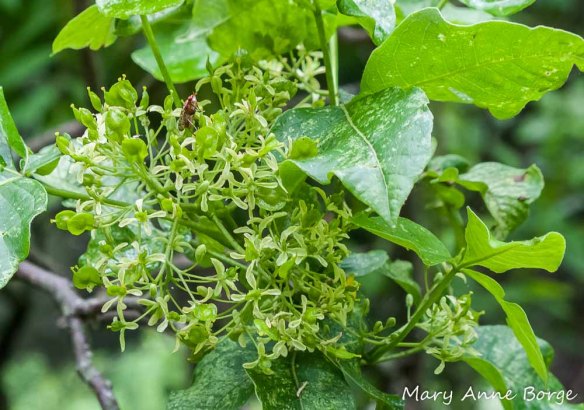 Hoptree (Ptelea trifoliata) flowers, being visited by a fly, a potential pollinator

The northern border of the Hoptree’s native range includes Quebec and Ontario provinces, and Nebraska, Colorado and Utah.  The range extends from there to all states to the south from Arizona to Florida.  Hoptrees can be found in a variety of habitats, including open woods, thickets, stream banks and prairies.  They like well-drained soil, and prefer shade to part-shade, but can tolerate full sun.  They are endangered in New Jersey and New York, and threatened in Pennsylvania.

Beresford-Kroeger, Diana.  Arboretum America: A Philosophy of the Forest.  2003