Late one afternoon a pair of dazzling creatures caught my eye as I walked toward my car in the parking lot at Bowman’s Hill Wildflower Preserve.  They were Pipevine Swallowtail butterflies, a male and a female, flitting about in the neighborhood of a very large Dutchman’s Pipevine (Aristolochia macrophylla), the plant that gives them their name. 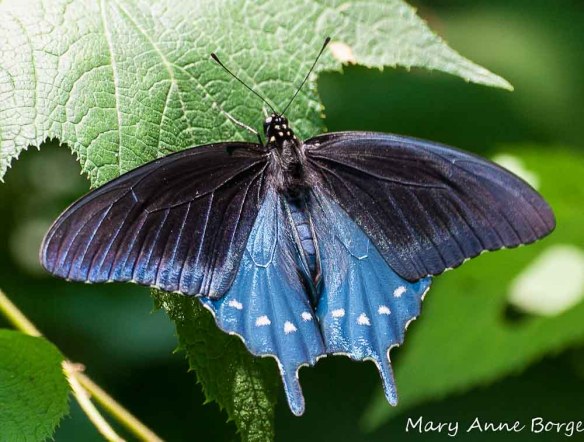 As I watched, the female occasionally landed on the Dutchman’s Pipevine, staying in one spot for a few moments, with her lower abdomen curved slightly to touch the Pipevine leaves or stems.  She was laying eggs!  In the photo below, two roundish orange eggs are visible on the stem of the vine, next to her right front leg.  If you look carefully at the tip of her abdomen, you can see a spot of orange – she’s just about to lay another. 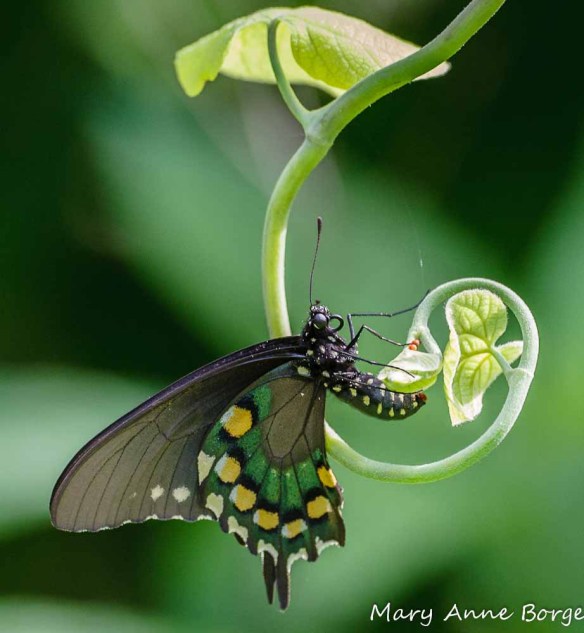 Some butterflies have evolved a survival strategy that enables their caterpillars to feed on a wide variety of plants, but others, like the Pipevine Swallowtail, have chosen to specialize on a small number of plants that give them a particular advantage.  To protect itself from being eaten, Dutchman’s Pipevine has evolved with chemicals that are at minimum distasteful to those who would eat it, and if a sufficient amount is ingested, they are toxic.  Pipevine Swallowtail caterpillars are among the few creatures who are able to process these chemicals without harm to themselves, then store them in their bodies in such a way that they are toxic to their potential predators.  This chemical protection even survives metamorphosis and extends to the adult butterfly.  It is so effective that other butterflies mimic the appearance of the Pipevine Swallowtail, since this is often enough to warn off predators.

Pipevine Swallowtails lay their eggs in small clusters of usually less than twenty, often on young leaves or stems of Pipevine plants, members of the genus Aristolochia.  In the mid-Atlantic, the only species that Pipevine Swallowtail caterpillars can eat are Dutchman’s Pipevine and Virginia Snakeroot.  In the southwestern part of its range, there are other native Pipevine species that this butterfly uses as its caterpillar food plants. 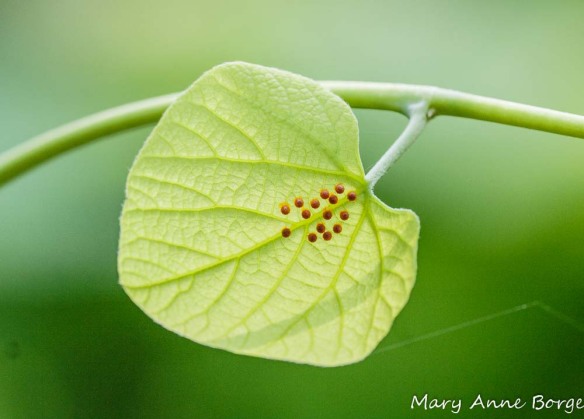 Soon after they hatch, the young caterpillars have a reddish spiny appearance. They tend to feed together in groups. 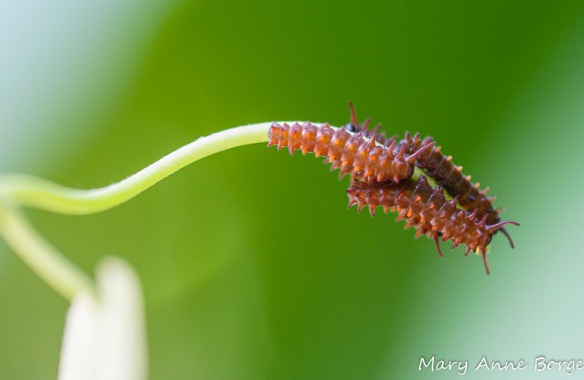 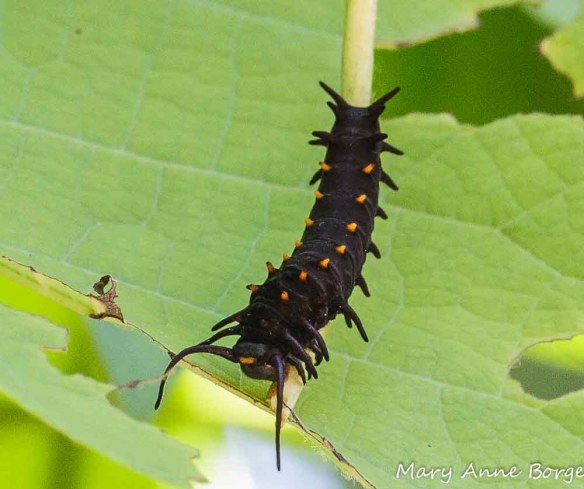 Adult butterflies feed on a variety of plants for their nectar, and may also seek out minerals at puddles.  They don’t feed on the flowers of the Pipevines, however, because they are not a good anatomical match for feeding or pollination.

Dutchman’s Pipevine is a deciduous vine with large heart-shaped leaves, but it is named for the shape of its flowers, which have a curved tubular shape ending in a flair with an opening in the center to allow pollinators to enter and search for a nectar reward.  The graceful Pipevine Swallowtail is too large to enter, and even its proboscis can’t extend enough to navigate the long curved tube to reach the flower’s food offerings. 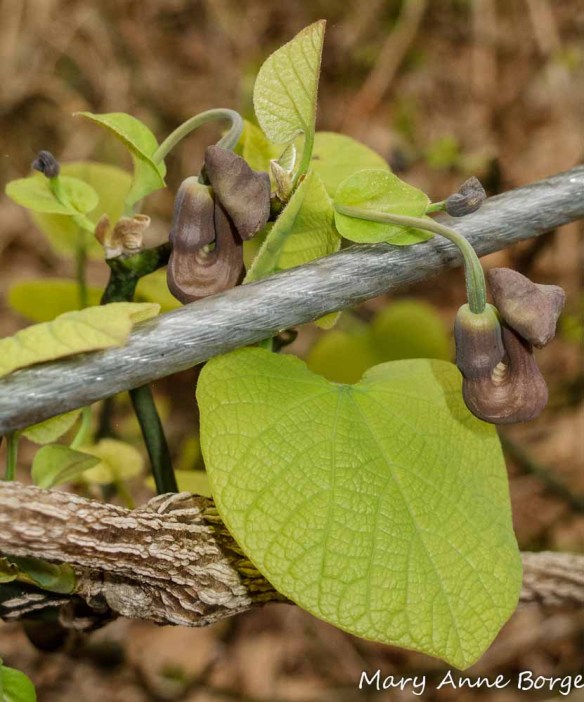 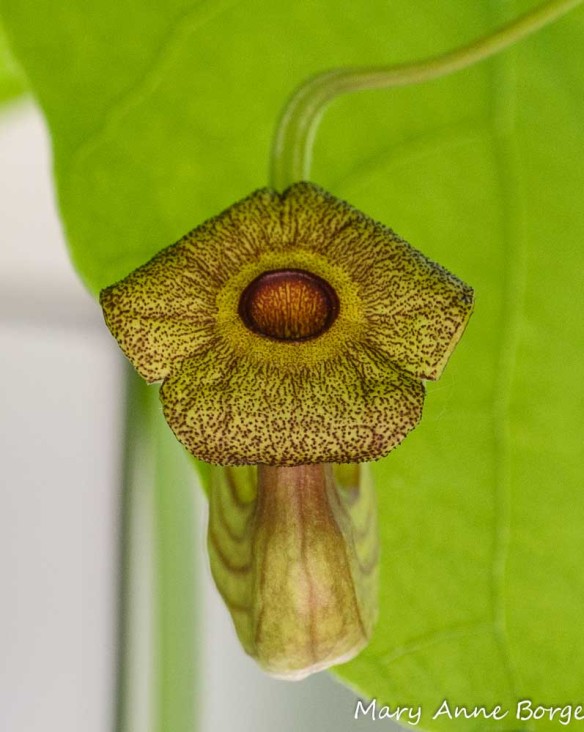 So how are the Pipevine flowers pollinated?  Small flies and gnats are attracted to the open throat of the flower by an aroma they can detect, and by the color pattern, both directing them forward down the tube.  As the insects enter, they are prevented from reversing course by hairs that line the flower’s throat, forcing the insect forward, a little like the metal spikes at parking lot entrances that will puncture your tires if you back up.  When the insect reaches the nectar source, it meets the sticky stigma of the female flower parts, depositing pollen brought in on its body from another Pipevine flower.  The plant detains the insect until the flower has been fertilized, offering it shelter and nectar, sort of like a little insect bed and breakfast.  The female flower parts wither, and the male parts mature, releasing pollen for the insect to pick up on its body.  The flower tube and its hairs relax enough for the insect to escape the way it entered, taking the pollen to the next flower it visits, ensuring the continuation of both the Dutchman’s Pipevine and the Pipevine Swallowtail species. 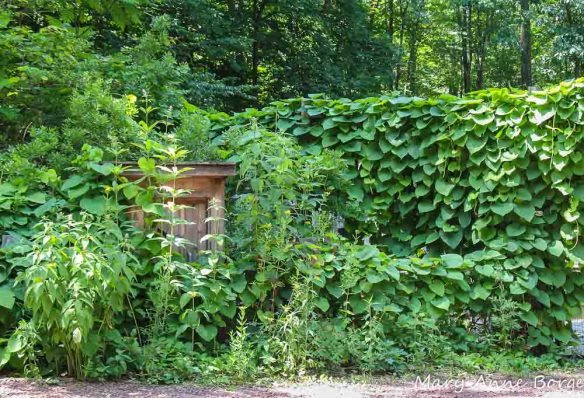