On a cool day in early November, my husband spotted a cluster of Bumble Bees on Blue Wood Aster (Symphyotrichum cordifolium) in the garden outside our living room window.  A queen bee was at the center of the group.  She was clinging to a flower, with as many as four other bees grasping her.  Amazingly, the queen was supporting the weight of the entire group.

We watched for about an hour.  During that time the number of bees clutching the queen varied a bit as some of the bees came and went.

It was a puzzle trying to figure out what was going on. Since the temperatures were fairly low, could they just be huddling together for warmth?

Later, when I looked at the photos I had taken, an explanation for their behavior presented itself. The smaller bees appeared to be males, one actively mating with the queen, with the others doggedly hoping for their turn.  (A bunch of hangers-on and wanna-bees. Sorry!)

In the Bumble Bee world, the only females that mate are queens. The primary role of male Bumble Bees is to pass on their genes if chosen by a queen for a chance to mate.  Queen Bumble Bees decide who their mating partners will be.  When a queen is ready she’ll chose the lucky male that will be the recipient of this honor.

This gathering may have been the male bees’ last chance to pass on their genes. The males, any non-breeding females and the old queen from a colony will die as the cold winter temperatures set in.

Only newly emerged queen Bumble Bees survive through the winter. Soon after successful mating, this new queen will seek an underground winter hibernation shelter. If she survives the stresses of winter, she will be among the first bees we see next spring, foraging on spring ephemerals.  She’ll look for a nest site, provision it with nectar and pollen, and begin laying eggs for the new Bumble Bee generation. 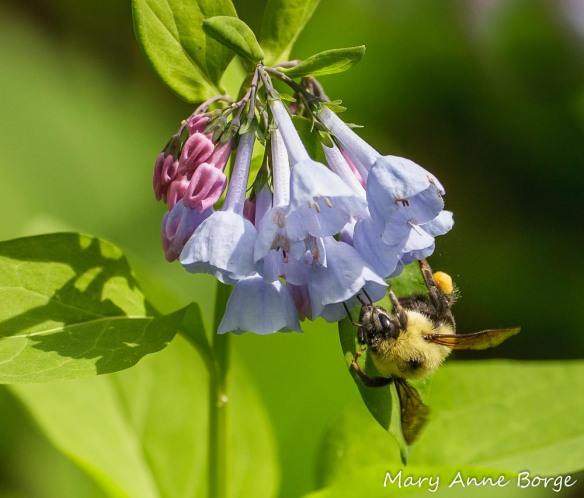 Thanks to Dr. Randi Eickel of Toadshade Wildflower Farm for help identifying the bees and their behavior.

Thanks to Jeff Worthington for ‘wanna-bees’.