Apparently I planted some Downy Skullcap (Scutellaria incana) in our garden last year and then promptly forgot, so it was a delightful surprise when the vivid blue flowers began to bloom in long stalks above gray-green foliage.

Each long tubular flower has an entrance with a hood- or cap-like overhang at the top, and a floor with a white pathway beckoning to visitors who might help pollinate the flowers. 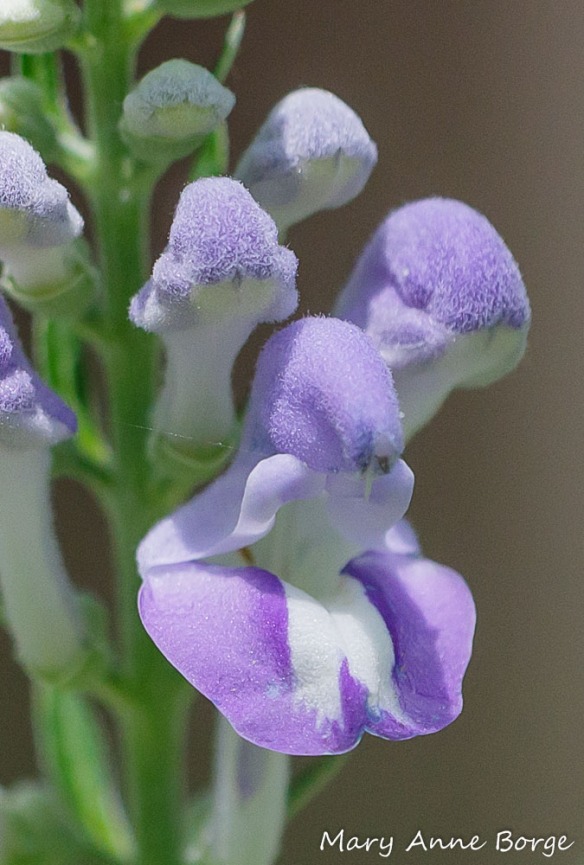 The almost sapphire blue flowers are especially attractive to bees, and are thought to be most often pollinated by Bumble Bees (Bombus species) but they entice other pollinators as well, including flower flies, bee flies, and small butterflies.

I watched for visitors to the flowers in our garden and at another near-by site, Bowman’s Hill Wildflower Preserve. At both locations, bees were the most frequent visitors on days when I checked, and of the bees, Small Carpenter Bees (Ceratina species) were the most common.

Don’t be put off by the fact that they are called carpenter bees.  These tiny bees won’t be drilling holes in the deck, siding or wood trim of your home.  They nest in the stems of dead or broken twigs, excavating nesting cells by chewing through the pith, the softer tissue inside the stem.  Small Carpenter Bees are pollinators of many plants, especially those with small flowers.

Each bee crawled inside the flower, disappearing down the throat until they reached the nectar reward at the bottom. 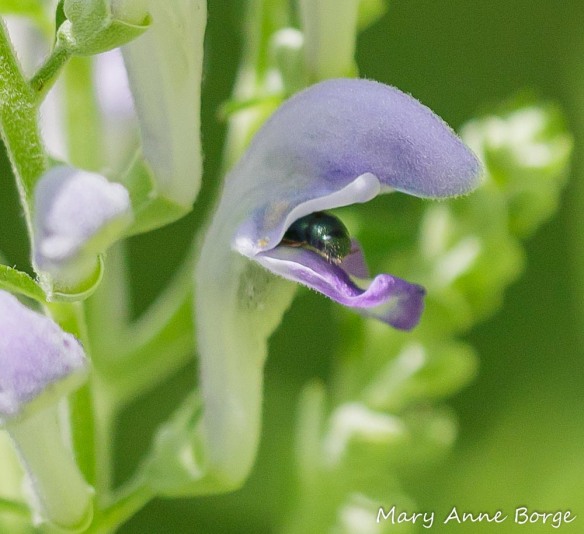 But it wasn’t just nectar they were after.  Bees need a balanced diet.  They wanted pollen, too, for the protein and lipids it provides.  The flowers’ reproductive parts, the stamens and pistils, are hidden under the hood at their entrance.  After emerging from drinking nectar at the depths of a flower, each bee then checked under the hood for pollen, which is dispersed from the anthers at the stamens’ tips.  Some bees even went straight for the pollen without bothering with the nectar.  Hopefully some of that pollen was later deposited on the stigma of another flower, the female flower part where pollen must be placed in order for pollination to occur. 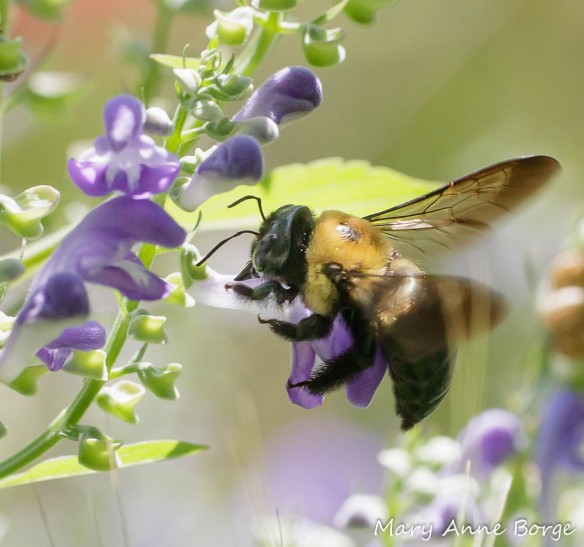 Downy Skullcap (Scutellaria incana) with Eastern Carpenter Bees (Xylocopa virginica) robbing the flower of nectar by biting through the floral tube to drink it.

While looking for Downy Skullcap flower visitors in our garden, I spotted a male Zabulon Skipper drinking nectar. 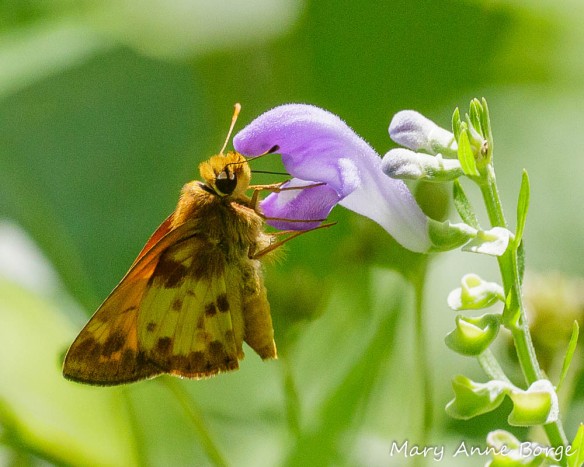 A moment later, I noticed a female Zabulon Skipper, doing the same.

Female Zabulon Skipper drinking nectar from a Downy Skullcap (Scutellaria incana) flower. Notice the bee disappearing into the flower above hers.

Then the male flew over to the female and suggested a ‘hook up’. 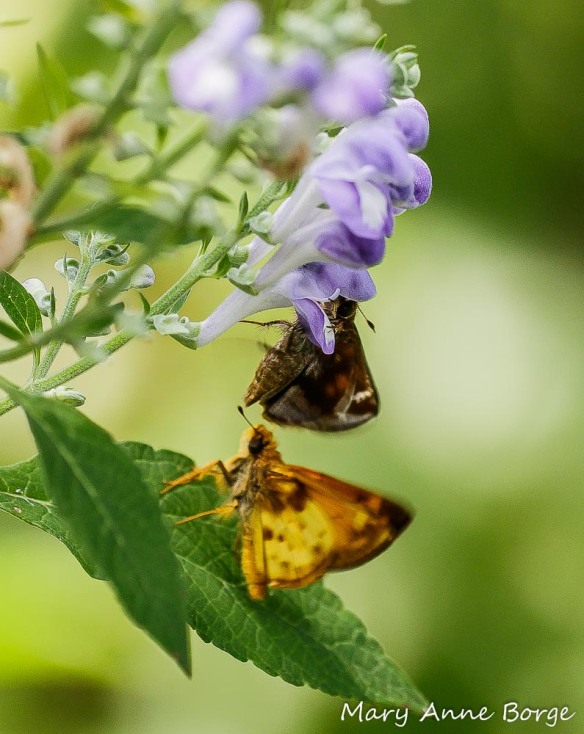 Female (top) and male (bottom) Zabulon Skippers, negotiating a hook up. Their wings are a little out of focus because both were vibrating them energetically as a lead-up to an agreement.

She was apparently persuaded by his pitch.  They went off to a more secluded spot, and stayed there beyond the limits of my attention span. 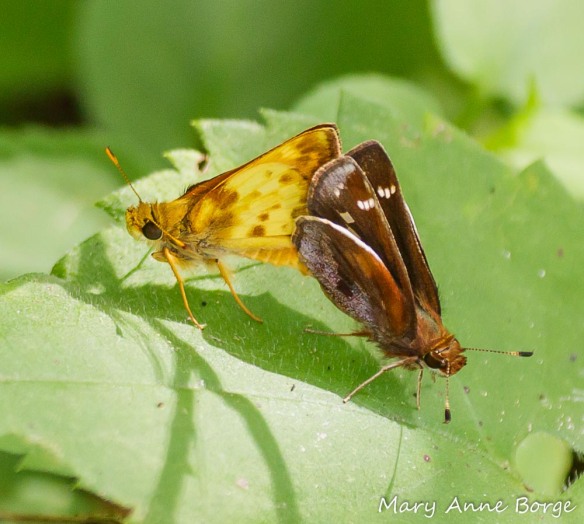 These small butterflies are common in gardens and natural areas, specializing on many grass species as food for their caterpillars, including Purpletop (Tridens flavus), Purple Love Grass (Eragrostis spectabilis), and other related species.

When the flowers have finished blooming and drop away, a cap-shaped calyx, the set of sepals that act as bud scales remains, providing the inspiration for the common name ‘skullcap’.

‘Downy’ in the common name and ‘incana’ in the scientific name, which means hoary or quite gray, refer to the short soft hairs present on the flowers and stems of this plant. Hoary Skullcap is another common name for the species.

Downy Skullcap is native in the United States from New York west to Wisconsin, south as far as Texas and the Florida panhandle.  It can tolerate full sun to full shade, dry to moist soil. Blooming in mid-summer, it makes a dramatic addition to a garden.  Add it to yours and wait for the real drama (food foraging, bee face-offs, theft, flirtation, sex!) to begin.