Bright yellow Partridge Pea (Chamaecrista fasciculata) flowers peek out from between the stems of taller grasses and flowering forbs in meadows, prairies, stream banks and other open areas from July through early September. 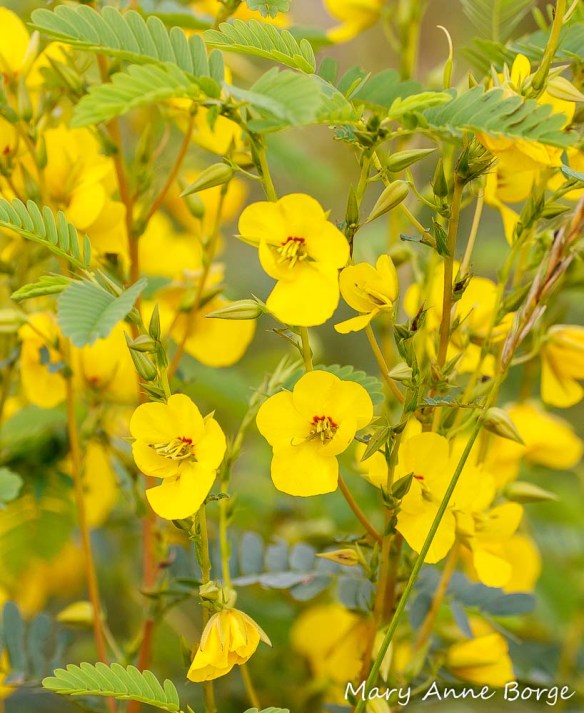 Partridge Pea’s flowers are tucked in the leaf axils down the length of the stem. 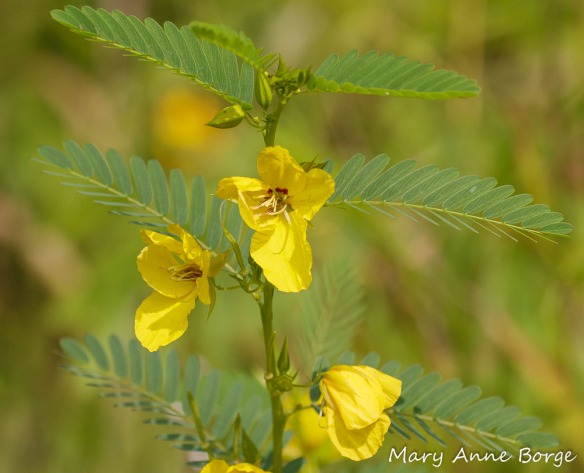 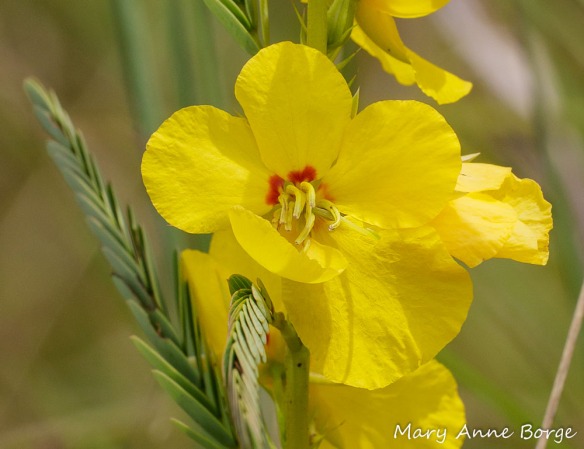 In the Partridge Pea flower in the photo above you can see the three evenly sized petals at the top, one petal in the lower left that curls toward the center of the flower, and an over-sized petal at the lower right. The stamens are mostly clustered at the middle of the flower.  The pistil resembles a hook projecting from beneath the right-most stamen. It is visible at the top of the over-sized petal.  Imagine a pollinator coming in for a landing using the over-sized petal as a runway, guided by the curved petal, with the red smudges on the petals as beacons. The pollinator brushes first against the receptive stigma at the tip of the pistil, depositing pollen from the last flower visited, then moves on to harvest pollen from the stamens. 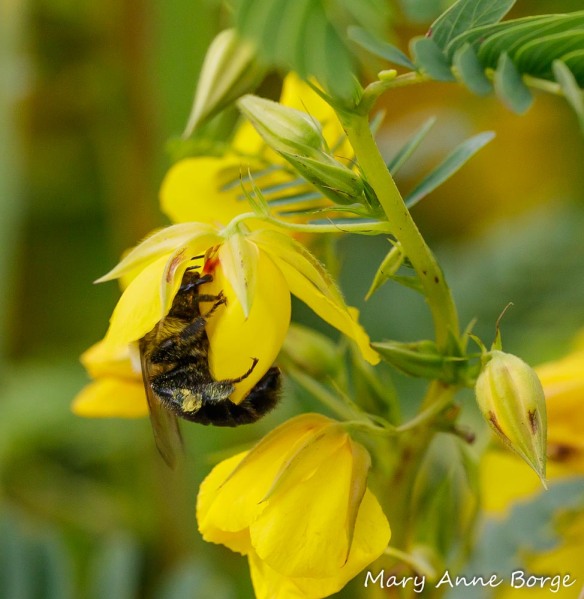 Partridge Pea flowers offer pollen as a reward to their visitors, but they don’t produce nectar. As a result, bees that collect pollen are the most likely visitors of the flowers.  But the bees have to have skills in order to harvest Partridge Pea’s pollen, since it requires special handling in order to access it.  The pollen is dispersed through a slit at the tip of the stamen’s anther.  Pollen can be shaken out of the anther as a result of buzz pollination, a technique in which a bee clings to the flower while vibrating its wing muscles without actually moving its wings.  ‘Milking’ the anther with a series of strokes is another method of successfully harvesting Partridge Pea’s pollen.[2] 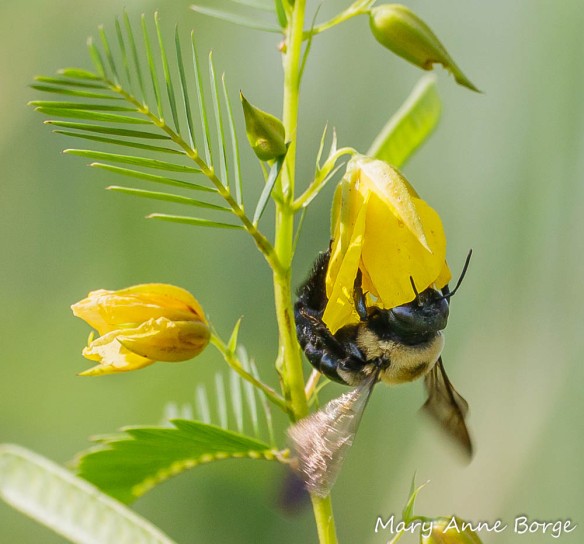 Butterflies aren’t interested in Partridge Pea flowers, since they don’t offer nectar. But several butterfly species use Partridge Pea as a food plant for their caterpillars, including the Sleepy Orange and Cloudless Sulphur. 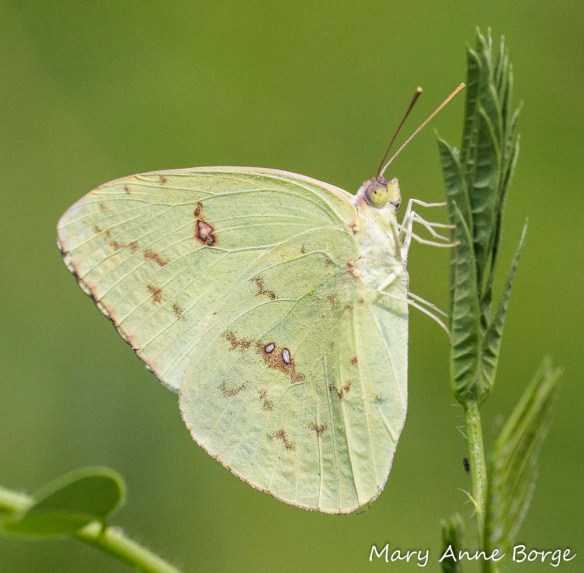 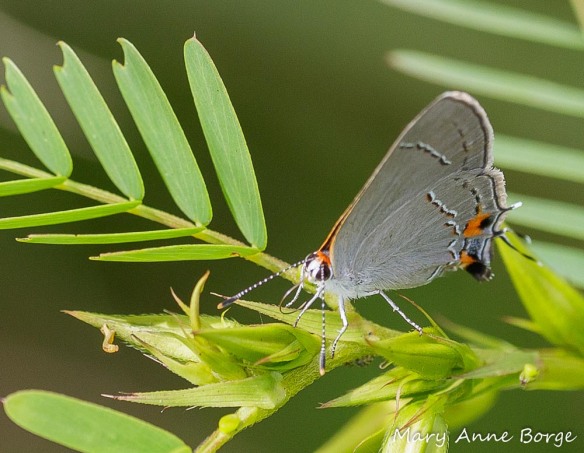 Gray Hairstreak and caterpillar on Partridge Pea (Chamaecrista fasciculata). Can you see the tiny caterpillar clinging to a leaf in the lower left of the photo?

When I saw a Gray Hairstreak butterfly spending time walking around a Partridge Pea plant, it seemed possible that this was a female laying eggs. Gray Hairstreaks use some Pea family members as caterpillar food, including clovers and tick-trefoils, although I haven’t seen any confirmation that they would use Partridge Pea.

A closer look showed that the butterfly was visiting Partridge Pea for nectar after all, but it was nectar that is made available through extrafloral nectaries on the base of the stem of each leaf.  This was a great benefit for the butterfly, but not much help for the plant, since the butterfly offered no services in return.

When present, extrafloral nectaries are generally a plant’s adaptation to entice insects that are predators of herbivores to visit and protect the plant. Ants are especially important in this role, since caterpillars are a very desirable food for them.  Some wasps and lady beetles are also potential protectors of plants.  While they are interested in nectar for themselves, they are also on the hunt for insects to feed to their larvae.  The wasps and lady beetles may rid the plant of the caterpillars or other insects who would eat it.  Nectar is provided in exchange for this protection.

Partridge Pea’s extrafloral nectaries look like tiny open pots, glistening with nectar, an open invitation to thirsty insects cruising through, not all of whom will offer services to the plant. 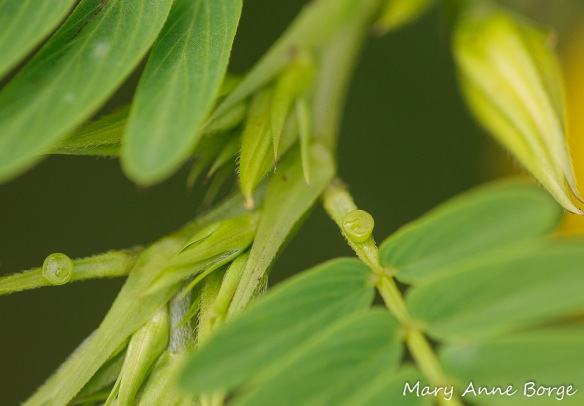 The two round pot-like appendages near the base of the Partridge Pea (Chamaecrista fasciculata) leaf stems are the extrafloral nectaries. Notice the glistening drops of nectar oozing from them.

While I have seen ants working Partridge Pea extrafloral nectaries, I was surprised at the variety of insects I saw drinking from them at one location I visited. It makes me wonder whether the cost of providing this nectar is worth the protection gained from them.  In addition to the Gray Hairstreak, I watched while a Bumble Bee spent more time visiting the extrafloral nectaries than the flowers.

After visiting several extrafloral nectaries, the Bumble Bee moved on to a flower.

I saw several Paper Wasps visit the nectaries. Since these wasps hunt caterpillars to feed their larvae, they do have the potential to provide a service in exchange for a tasty drink.

Some accounts of Partridge Pea say that the leaves will sometimes fold up when they are touched. I’ve tried it several times, but I have never had Partridge Pea respond to my touch.  However, I have seen Partridge Pea plants with their leaves folded, so I’m guessing the plant folds its leaves in response to some stimuli, but I haven’t found an explanation for what it might be.  Maybe it’s a mechanism to prevent excessive water loss on hot, dry, or windy days.  Or maybe the plant responds to the touch of a butterfly laying eggs, and wants to minimize the leaf surface available to her.  I wish I knew! 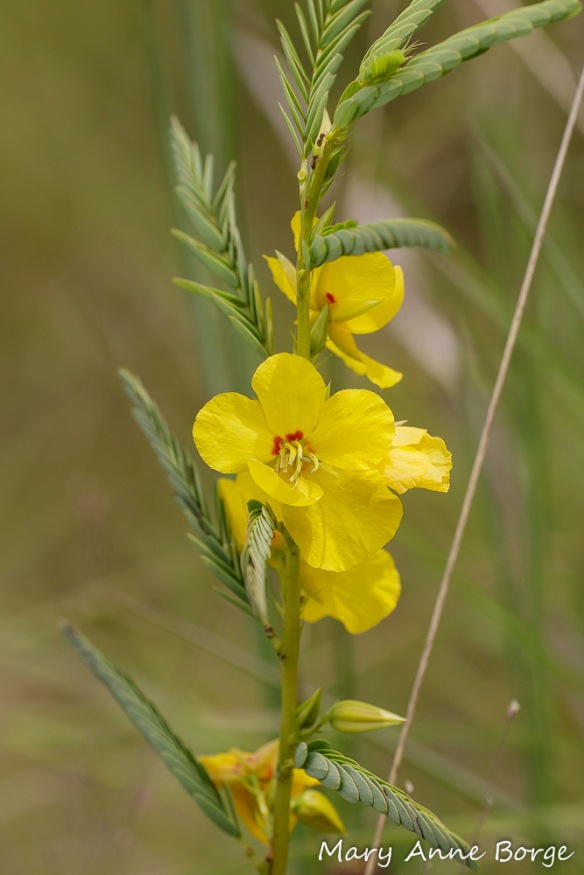 Partridge Pea (Chamaecrista fasciculata) with leaflets folded. What prompted this?

If the name didn’t give away its family heritage, the fruits identify Partridge Pea as a member of the Pea or Bean (Fabaceae) family.  These fruits are an important winter source of food for birds, especially Bobwhites and Greater Prairie Chicken.

Partridge Pea is an annual, but reseeds itself readily.  It likes sun, and can tolerate poor, dry soils.  It helps to fertilize soils through its release of nitrogen, and is sometimes used in stream bank stabilization.  Partridge Pea is native from Rhode Island to Minnesota in the north, south as far as southeastern New Mexico, and from Texas to Florida. 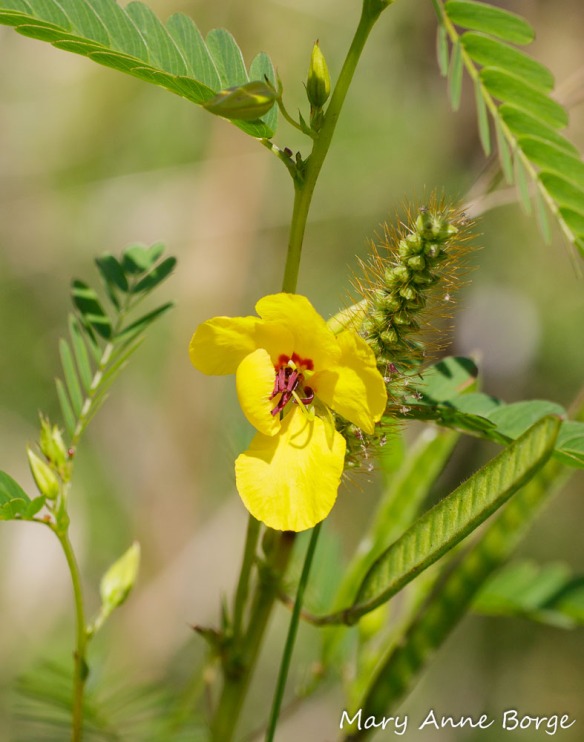 Cloudless Sulphurs Are on the Move

Sleepy Orange Butterflies are Back

Natural Selection on Extrafloral Nectar Production in Chamaecrista Fasciculata: The Costs and Benefits of a Mutualism Trait