On a late September Sunday at Garden in the Woods in Framingham, Massachusetts, I watched while Bumble Bees and Honey Bees took advantage of White Snakeroot’s abundant nectar.

Painted Ladies and Sachem helped themselves to White Snakeroot’s sustaining beverage. These butterflies have been around much of the summer and fall, drinking from the flowers in bloom, moving from one species to the next as the season changed.

I was excited to see a Fiery Skipper, a butterfly that is rare in Pennsylvania, but a common resident in the southern United States. Fiery Skippers are among the butterfly species that regularly attempt to push the envelope of their range by emigrating to the north. White Snakeroot’s refreshing nectar rewarded this individual for its exploration efforts. 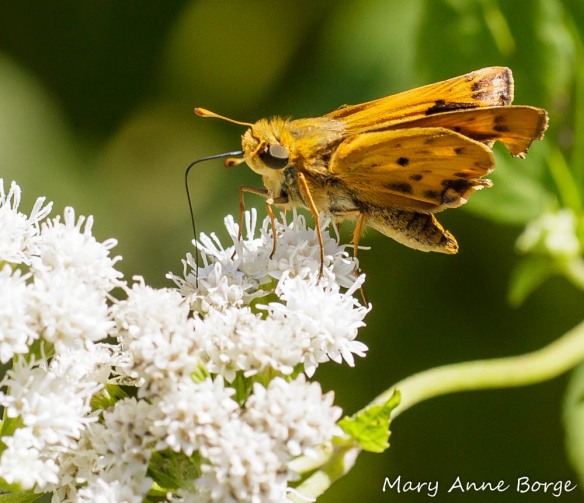 Meanwhile, a Monarch fueled up for a flight in the opposite direction, heading south towards its winter territory in Mexico.

If these potential pollinators do the job for which White Snakeroot has enticed them to visit its flowers, pollination occurs, and a type of fruit, called an achene, develops. The achene looks like a seed with a tiny hair-like parasol attached, designed to be dispersed by the wind to a favorable place for another White Snakeroot plant to germinate and grow. 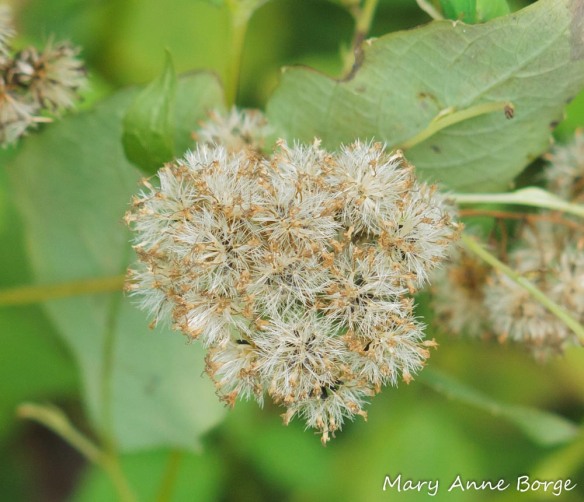 It’s interesting that this small insect is able to eat parts of White Snakeroot, since this plant contains potent toxins evolved to prevent herbivores from consuming it. These toxins are so effective that they can be fatal to mammals.  As you might guess, deer do not eat this plant.  If cows graze on a sufficient amount of White Snakeroot, the milk they produce is toxic to humans.  In the nineteenth century, many people became sick or even died as a result of drinking this tainted milk, most famously, Abraham Lincoln’s mother.

While this plant’s chemical defenses are potent enough to sicken or even kill large mammals, some tiny insects have successfully adapted to use this plant as their food source (host plant). A type of small fly species, a midge named Schizomyia eupatoriflorae, specializes on White Snakeroot buds.  The larvae of this midge live inside the plant tissue, prompting the plant to produce a rounded gall that the developing midge uses for both food and shelter until it is ready to emerge as an adult.

White Snakeroot (Ageratina altissima) with galls caused by the plant’s reaction to being used by a midge, Schizomyia eupatoriflorae

Flowers often have a lower concentration of a plant’s chemical defenses than do the other plant parts such as leaves and stems. But there are even insects who have evolved to specialize on White Snakeroot’s leaves.  The one of which I most often see evidence is a leaf miner, Liriomyza eupatoriella, a type of fly. The larvae of Liriomyza eupatoriella develop between the outer layers of the leaf, feeding on the tissues inside. 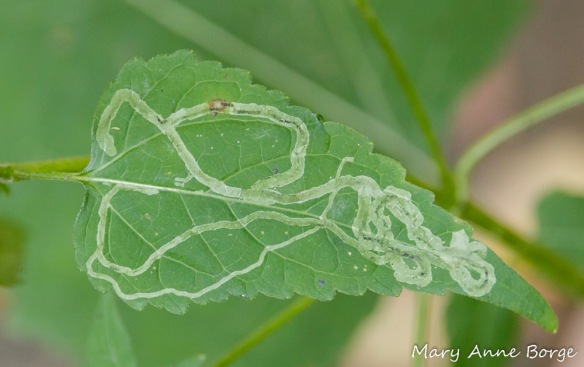 Mammals have plenty of other food alternatives (at least for now) without having to evolve a tolerance for White Snakeroot’s toxins. But tiny insects may gain an advantage if they can specialize on food that few others can consume (and live to tell the tale!), especially a relatively common food source like White Snakeroot.

Despite its toxicity, several Native American tribes found medicinal uses for White Snakeroot, often using the root, but other plant parts as well. Some sources say that a poultice to treat snakebites was made from the root, resulting in the common name, White Snakeroot.

White Snakeroot is a plant of woods and woods edges. It prefers light shade but can tolerate partial sun, with moist to slightly dry soils.  In Canada it is native in Ontario and Quebec provinces and the Northwest Territories, and in the United States from Maine to eastern North Dakota, south to Texas and the Florida panhandle, although it is much less widespread in the southeastern U.S.

Coffey, Timothy. The History and Folklore of North American Wildflowers.  1993.

19 thoughts on “White Snakeroot, and a Bit of a Paradox”