Common, or Allegheny, Blackberry (Rubus allegheniensis) brambles are blooming in woodlands and meadows throughout the local areas I frequent in central New Jersey and eastern Pennsylvania.  This Rose (Rosaceae) family member can be found from Quebec to Ontario provinces in Canada, south as far as South Carolina and Oklahoma in the United States.  It is also present in California and British Columbia. 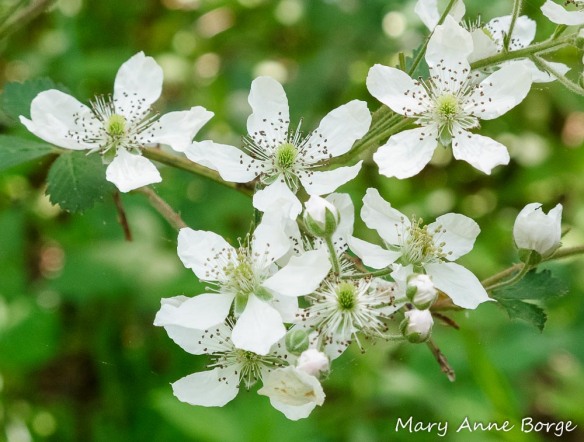 At Bowman’s Hill Wildflower Preserve, near New Hope, Pennsylvania, I found masses of Wild Blackberry blooming in the meadow. Traditionally, the entire meadow is mowed during the winter, but this year a new method of meadow maintenance was introduced, one recommended by the Xerces Society.  Only part of the site was mowed last year, in order to preserve habitat for overwintering insects, birds, and other animals.  This new technique is already paying off, with an impressive display of flowering Blackberry canes, and an equally impressive variety of native pollinators visiting the flowers.

I wasn’t the only one to discover the Blackberries in bloom. From a distance, I could see that at least three Monarch butterflies were already there, flirting and drinking nectar, drawing me in to get a closer look.  They were my first certain Monarch sighting of the season. 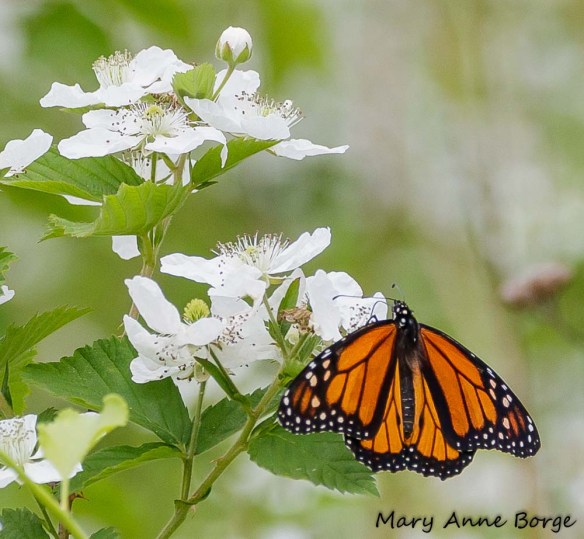 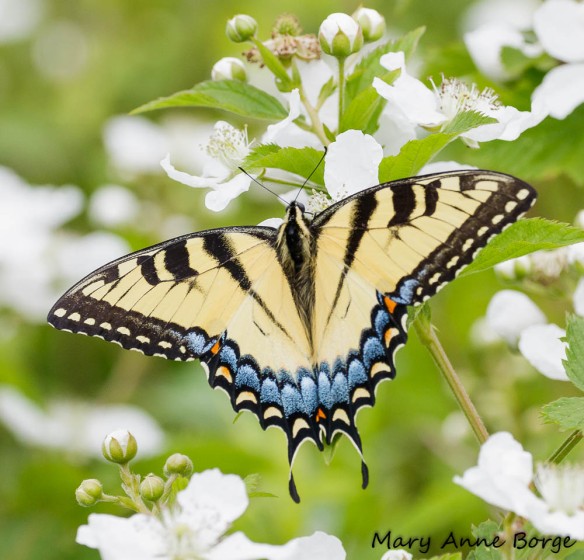 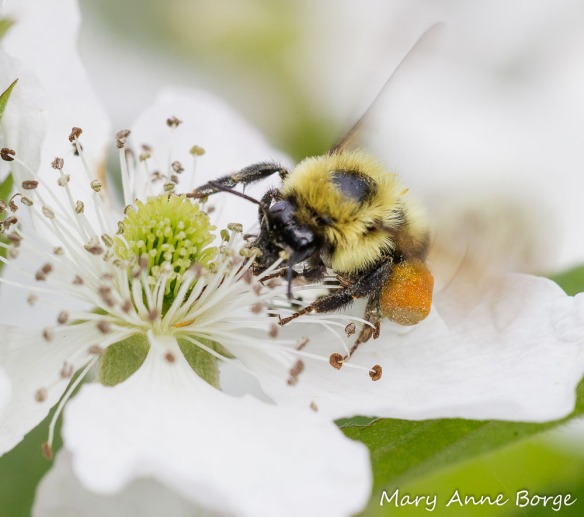 Female Bumble Bee (Bombus species) foraging on Common Blackberry (Rubus allegheniensis). Notice the huge orange load of pollen she has harvested to take back to her nest to feed her larvae.

A pair of soldier beetles, Pennsylvania Leatherwings (Chauliognathus pensylvanicus) were mating at the same time the female impressively foraged the flowers for food, a pretty common beetle behavior combination. 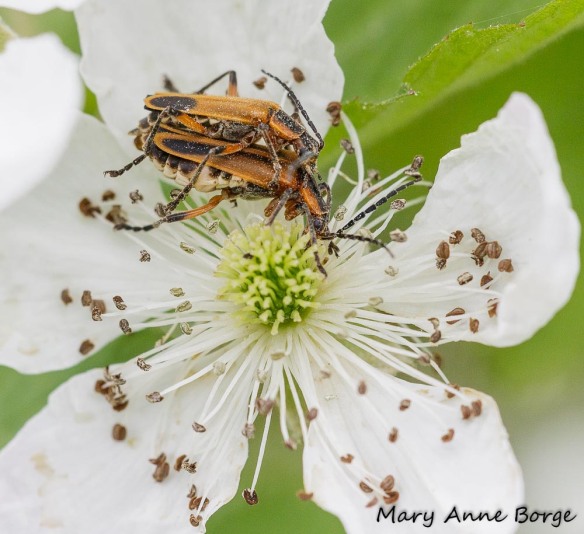 A Flower or Syrphid Fly (Toxomerus geminatus) ate pollen from the flowers, probably not helping very much to pollinate the Blackberries.  Flies, bees and even beetles all consume some of the pollen.  Only about 2% of pollen is actually used for pollination. The rest serves as an enticement to flower visitors.

A Flesh Fly, and a Robber Fly disguised as a Bumble Bee paused on Blackberry leaves. As a carnivore, the Robber Fly’s mission is to capture and eat other insects.  The disguise may help it elude predators and seem harmless to its intended prey. 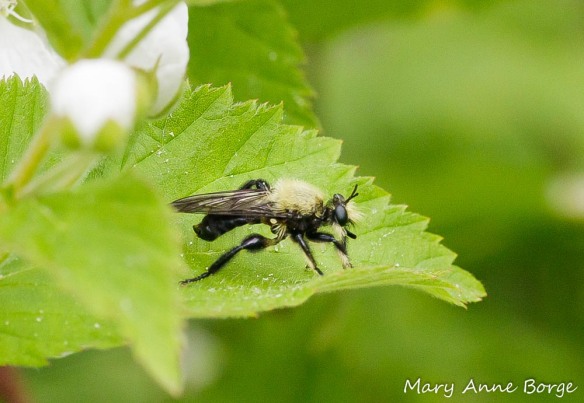 At a woods edge location nearby in New Jersey, a Bumble Bee and Orange Sulphur enjoyed the nectar the Blackberries offered. 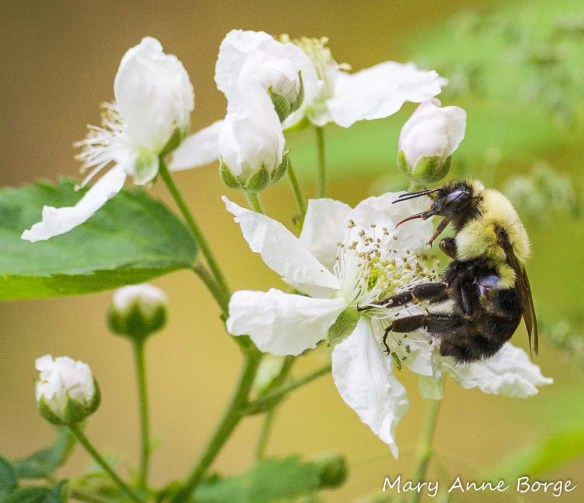 Common Blackberry has high value for other animals. The insect flower visitors will help to ensure a late summer feast of blackberries for birds, and mammals from mice to fox, and even bear.  They’re very healthy for humans, too! 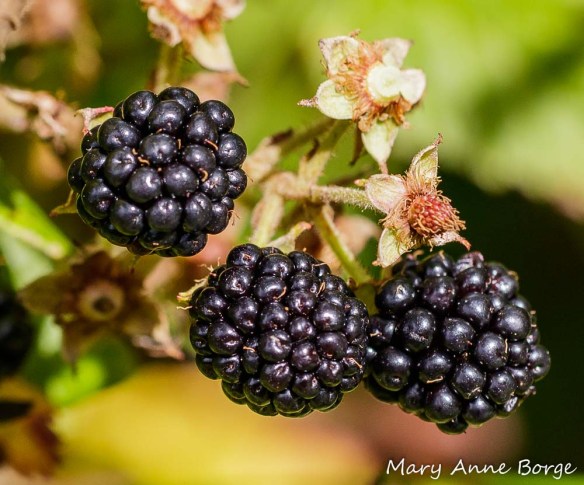 During the summer, these Common Blackberry brambles offer the perfect nesting habitat for Indigo Buntings. I saw a flash of blue feathers heading for a nearby tree, so they may already be in the process of establishing their nesting territory.

Multiflora Rose (Rosa multiflora), another Rose family member, is also in bloom.  This species was introduced from Asia for use in hedgerows, especially around farm fields.  As is so often the case, it turned out the introduction was a bad idea.  Multiflora Rose has since become invasive in much of the United States and Canada.  Several states list it as a noxious weed, and some prohibit it.

Plants and even animals that are introduced in a location far from where they evolved often become a problem in their new environment, since the natural predators with which they evolved are not present. In their native locations, these predators help to keep the plant or animal population in balance with other species.  Without these natural checks, the introduced species can crowd out the native plant species on which the animals with which they evolved depend.  We end up losing both plant and animal species as a result.

There is a family resemblance between Common Blackberry and Multiflora Rose, but it’s fairly easy to tell them apart. 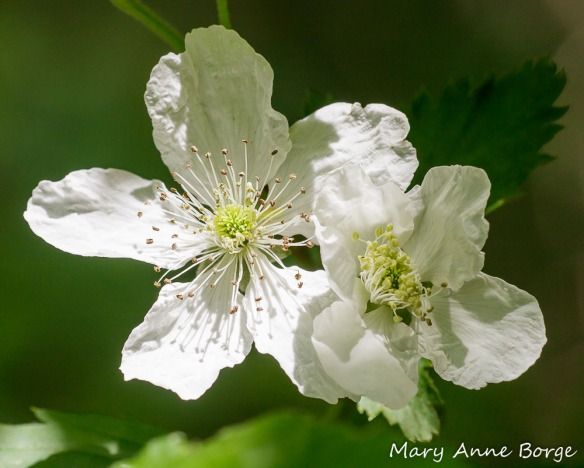 Common Blackberry flowers are usually white, about 1-1 ½ inches (2.54-3.8 cm) in diameter. The petals have rounded tips.  A large cluster of greenish pistils, the female reproductive flower parts, are visible at the center of the flowers.  These pistils together produce an aggregation of tiny fleshy fruits (called druplets) that are what we know as a blackberry.  The fruits start out green, turning red and eventually black when they’re ripe.  The stamens (male reproductive parts) surround the pistils.  They have white filaments topped with brownish anthers from which pollen is released.

Multiflora Rose flowers are also usually white, or rarely pinkish. They are just a bit smaller, and the tip of each petal is notched, not rounded.  There is a single greenish pistil at the center of the flower that produces a single round red berry-like fruit called a hip. The pistil is surrounded by stamens with creamy yellow filaments and darker golden anthers.  Multiflora Rose leaves have a distinctive fringe along the sides of the base of the stem.  This is not present in Common Blackberry.

Where I have seen Common Blackberry and Multiflora Rose in close proximity to each other, the pollinators always choose Common Blackberry. It may be a small sampling for a scientific study, but it seems like a pretty telling endorsement to me! 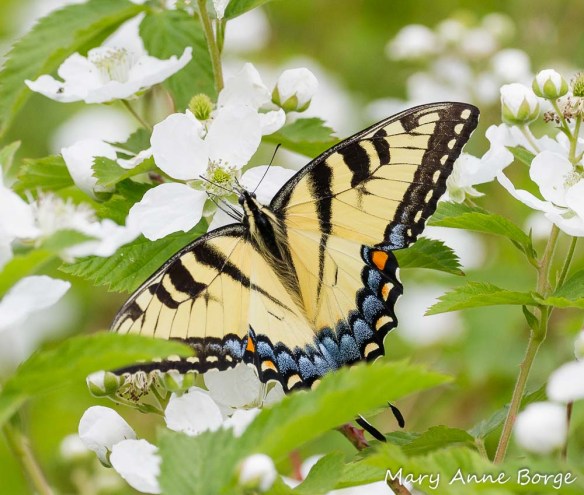 Indigo Buntings – Living on the Edge!

For Information on Meadow Maintenance from the Xerces Society

Marshall, Stephen A. Insects Their Natural History and Diversity. 2006.

For Information on Mutiflora Rose