Black Cherry or Wild Black Cherry (Prunus serotina) is a bountiful tree for wildlife, and an important species for humans, too.  It blooms in spring, with a profusion of long, slender, densely packed flower clusters.

The flowers offer nectar and pollen as enticements to a variety of bee and fly species who need this food to survive. The insects become Black Cherry’s unsuspecting pollination partners.  In return for the food provided to these insect floral visitors, the flowers benefit by having some of their pollen transported on the insects’ bodies and deposited advantageously for pollination on other Black Cherry flowers.  Successful pollination will result in fruit that ripens in late summer and fall.

A broad spectrum of animals eat Black Cherry’s fleshy fruit. Many thrushes, woodpeckers, sparrows, bluebirds, tanagers, orioles, and Cedar Waxings are among the dozens of bird species that eat the fruit. 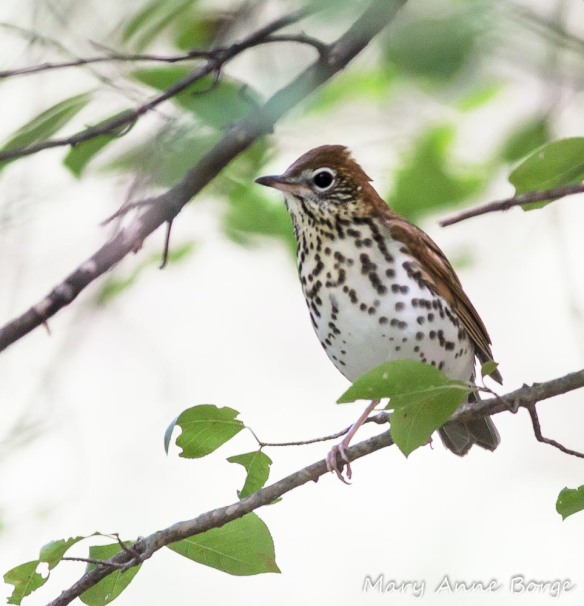 The fruit has evolved to lure animals to help Black Cherry spread its seeds. In exchange for the meal, the seeds are ‘dispersed’ after traveling through the animals’ digestive tracts.

Hundreds of insect species depend on Black Cherry for food, and in some cases, shelter.

In spring, finger galls caused by a mite (Eriophyes cerasicrumena) are conspicuous on Black Cherry leaves.  A gall is a plant’s reaction to being used as food and shelter by an insect.  The mite will feed on the tissue inside the gall until the mite matures and emerges from the gall.

You may be used to seeing Eastern Tiger Swallowtail butterflies feeding on nectar from a variety of plants.

But Eastern Tiger Swallowtail caterpillars have a completely different diet. They depend on the leaves of several woody plants species as their food source, including Black Cherry.

Eastern Tiger Swallowtails are just one of 456 species of butterflies and moths whose caterpillars eat the leaves of Black Cherry and other Prunus species, according to research from Douglas W. Tallamy and the University of Delaware.  These caterpillars are in turn an important source of food for birds, especially when they are raising their young.

But even Tent caterpillars have redeeming qualities, since they are an important food source for both Yellow- and Black-billed Cuckoos.

Adult butterflies and moths may also become food for birds or other insects, and in the case of night-flying moths (including Tent caterpillars that survive to become adult moths), for bats.

In addition to the nectar offered by its flowers, Black Cherry provides nectar from glands on its leaf stems. These nectaries are not targeting pollinators.  Instead, they are there to lure a mercenary army of ants to protect the tree from herbivores, especially caterpillars. The nectaries entice ants to visit the trees for a drink.  While there, the ants may also help to keep the caterpillar population in check, since ants also need insect protein as part of their diet.

People benefit directly from Black Cherry trees.  In addition to the beauty of its flowers, fruits and foliage, Black Cherry’s wood is an important timber crop, primarily for use in furniture and cabinet making.  Black Cherry’s fruit is used to flavor brandies and to make a liqueur called cherry bounce.  The fruit is somewhat bitter, but with added sugar it can be used to make jellies.  Eating the raw fruit is not advisable, since the seeds can be toxic.  Medicinally, Black Cherry’s inner bark has been used in cough suppressants.

Black Cherry can grow to a maximum height of 80-100 feet (24-30 meters). Its range is primarily eastern North America, from Canada through the United States and south into Mexico, although it is an adaptable species and may also be found in some areas of the Pacific Northwest.

Providing beauty, timber, food and medicine for humans, food for birds, mammals, pollinators and hundreds of other insects, Black Cherry is among our most productive native trees. 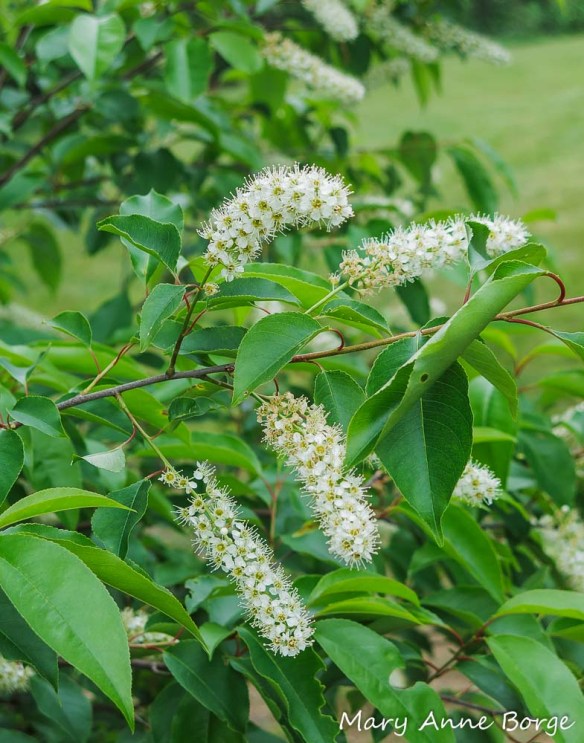 21 thoughts on “Black Cherry – for Wildlife, and People, too!”