On a recent walk through a local meadow I spotted a bank of Field Thistle (Cirsium discolor).

It was eye-catching for two reasons.  The sight of the plant itself is arresting, with its tall candelabra-like shape topped with purple pompoms of flowers instead of candle flames.  But it was the sight of so many visitors to the flowers, often several on a single flower head, that was really breath-taking.  Bumble Bees, Honey Bees, Clearwing Moths and so many different butterflies moved quickly from flower to flower, pausing briefly to dine.  Field Thistle presents a sumptuous feast for potential pollinators!

At one ‘banquet table’, a Honey Bee, a Thistle Long-horned Bee (Melissodes desponsus) and a Hummingbird Clearwing Moth all dined amiably together.

How is it that one flower head can accommodate so many visitors simultaneously?  Field Thistle is a member of the Aster or Composite (Asteraceae) family.  Each of the purple pompoms consists of a cluster of many long narrow tubular disk flowers.  You can see the individual flowers in the head in the lower part of the photo below.

The Long-horned Thistle Bee in the photo below is actively eating both pollen and nectar, and harvesting more to provision her nest for her larvae.  You can see the pollen she has collected packed onto hairs, called scopae, on her hind legs. We know this is a female, because only female bees harvest food for their offspring.  This bee species specializes on pollen from Field Thistle and a few other closely related plants (all of the genus Cirsium) for her larvae.  This makes her an excellent pollinator for Field Thistle, since she won’t be visiting other flowers.  It also means that without these thistles, this bee species would not survive.  It’s the same concept as the Monarch butterfly’s dependency on Milkweeds (Asclepias species) for survival, because Milkweeds are the only food their caterpillars can eat.

Thistle Long-horned Bee (Melissodes desponsus) feeding on Field Thistle (Cirsium discolor). She’ll bring the pollen on her hind legs to her nest. Note the pollen grains all over her body! Some will help with pollination.

Although it appears in the photos above that the various visitors to these flowers are happy to share the wealth of the Field Thistle banquet, I’m sorry to have to report that the Honey Bees actually indulged in bullying behavior.  They were especially hostile to the Thistle Long-horned Bees, trying to chase them away by bumping them.

Fortunately, the Thistle Long-horned Bees were undeterred.  They were also respectful of other diners, even those smaller than themselves. 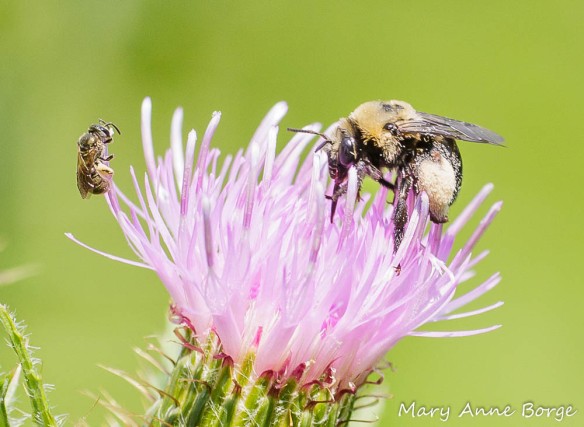 I visited this meadow several times within a few weeks, and each time there were at least a half dozen Hummingbird Clearwing Moths at the thistle.

Their close relative, a Snowberry Clearwing Moth, also stopped by for a drink. 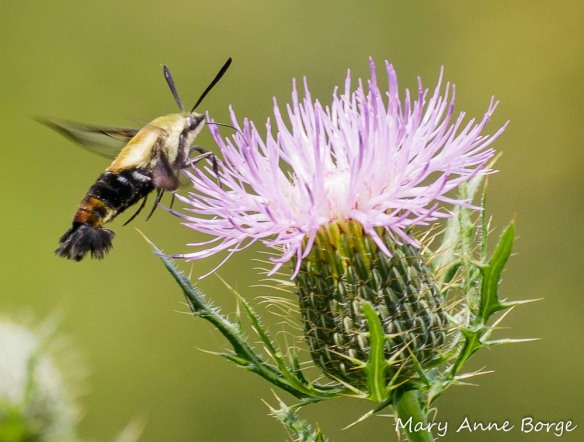 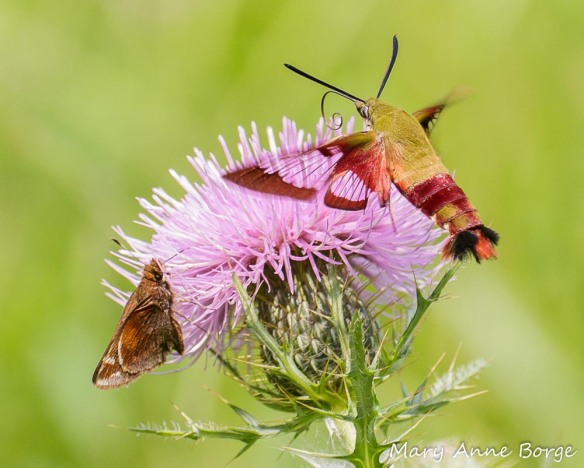 These skippers are small butterflies who specialize on various grass species as food for their caterpillars.  Many of these grasses can be found nearby in the meadow.

Peck’s Skippers were ubiquitous, sipping nectar alone and in the company of others, including Spicebush Swallowtails and Great-spangled Fritillaries. 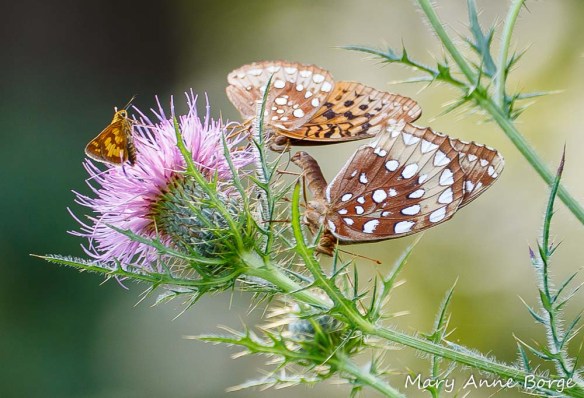 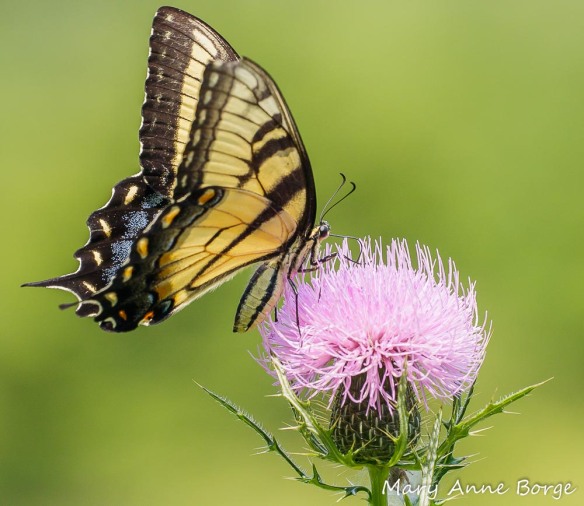 It was very encouraging to see that there were many Monarch butterflies partaking of the thistle feast.  Both Common (Asclepias syriaca) and Swamp Milkweed (Asclepias incarnata) were available in the meadow for egg-laying. 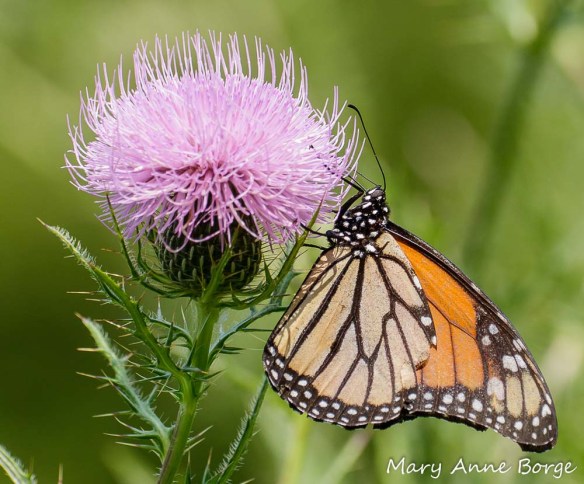 Even Ruby-throated Hummingbirds visited the thistles for nectar, but they didn’t stay long enough for a photo op.

Field Thistle’s strategy to protect itself from being eaten is to have very spiny leaves and branches.  This works well in deterring mammals from munching the plant; Field Thistle is not a species that deer are likely to browse.  But caterpillars are a different story.  Painted Lady butterflies as well as Common Loopers and some other moth species use this plant as food for their caterpillars.

Painted Lady on White Snakeroot (Ageratina altissima). Field Thistle (Cirsium discolor) is one of the plant species that Painted Lady butterflies can use as food for their caterpillars. 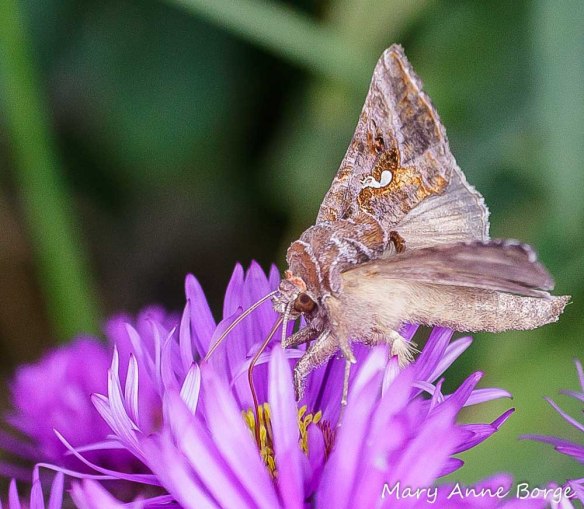 After all of this help with pollination, Field Thistle produces seed-like fruits called achenes.  They have a light, white fluff (called pappus) attached, enabling their dispersal by the wind. But these fruits are also desirable food and nesting material for Goldfinches and other birds. 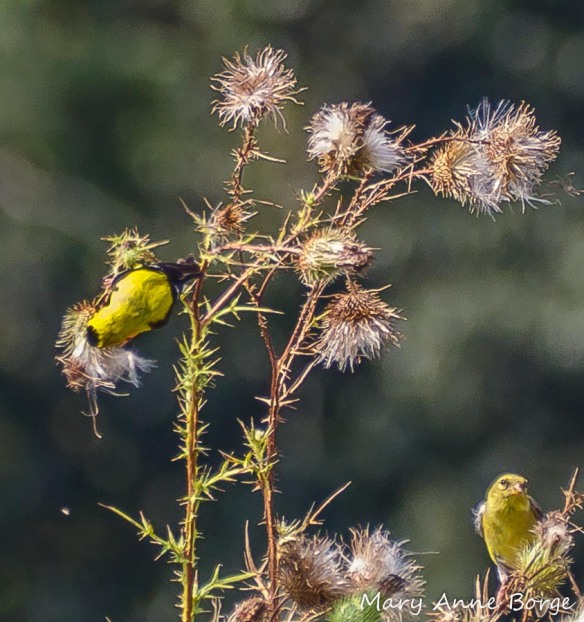 Field Thistle is native from Saskatchewan to Quebec provinces in Canada and in much of the eastern half of the United States, although it is less common in the southeastern states and absent from Florida.  The flower color can vary from purple to pinkish, and is occasionally white.  Field Thistle is a biennial or short-lived perennial, replacing itself by producing seeds.  It can grow to a height of five to seven feet (1.5 – 2.1 meters).  Unlike some non-native thistles, Field Thistle is not invasive. 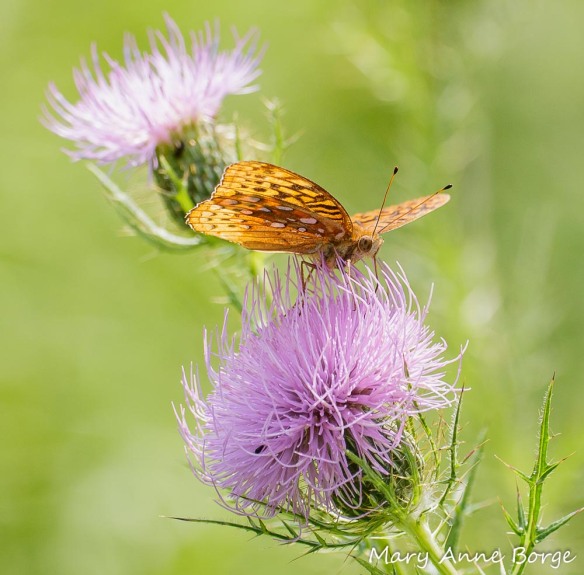 Field Thistle (Cirsium discolor) with great-spangled Fritillary butterfly. Note the stand-up leaf collar hugging the base of the flower head.

Field Thistle isn’t traditionally used in gardens, but in the right location in a sunny garden, it could really make a statement, and bring so many visitors! 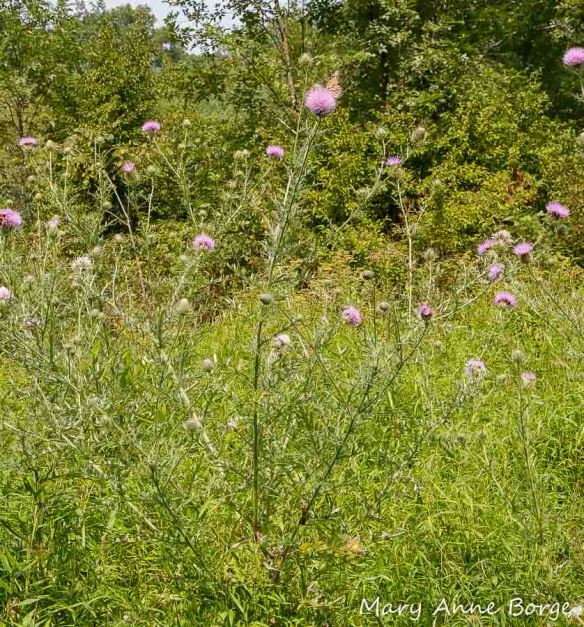 A Butterfly garden that Embraces the Shade

Black Cherry – for Wildlife and People, Too!

Clemants, Steven; Gracie, Carol. Wildflowers in the Field and Forest. 2006.

10 thoughts on “A Thistle Banquet”