The large, luscious fruit of Pawpaw (Asimina triloba) trees is ripening now. Its flavor is a bit reminiscent of a tropical fruit, hinting at banana or mango. In addition to people, the fruits are eaten by many other mammals, including raccoons, fox, and squirrels. These animals help to distribute Pawpaw’s seeds.

Pawpaws contain more nutrients than many more commonly eaten fruits, including apples, grapes and peaches. They contain annonaceous acetogenins, chemical compounds that have anticancer properties. These compounds are able to sap cancer cells of their energy, and are thought to have potential in treating cancers that are resistant to other drugs. The compounds are also effective against malaria, as well as other microbial infections.

In addition to having fruit with a tropical taste, this woodland understory tree has a tropical look, with long, broad, tapering leaves. 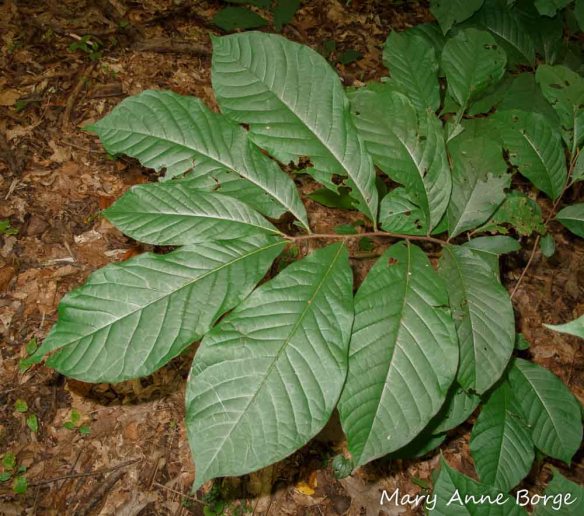 Pawpaw reproduces easily through its root system, tending to form colonies. It’s appropriate for this tree and its fruit to hint of the tropics, since it is a member of the Custard Apple (Annonaceae) plant family, the majority of whose members are native to the tropics.

The leaves contain compounds that deter herbivores, so deer browsing is not a problem, and few insects eat the leaves. There are always exceptions, though. Zebra Swallowtail butterfly and Pawpaw Sphinx moth caterpillars can tolerate consuming these chemicals. As a result, the chemicals protect the caterpillars, pupae and adults of these species, making them less palatable to predators. As the trees prepare for their winter dormancy over the next few weeks, Pawpaw leaves will turn bright yellow before finally falling from their branches.

Look for the flowers of Pawpaw as the leaves unfold in spring, usually in early May.

Pawpaw’s dark reddish maroon flowers attract insects as pollinators, primarily flies that lay their eggs in carrion (dead rotting flesh!), where their larvae, called maggots, develop. Some Carrion beetles may also be pollinators for this species. Pawpaw has evolved to attract these insects as pollinators through deception. The flower color mimics the carrion these insects visit to lay their eggs.  But these flower visitors will have to keep searching to find the right food for their offspring. 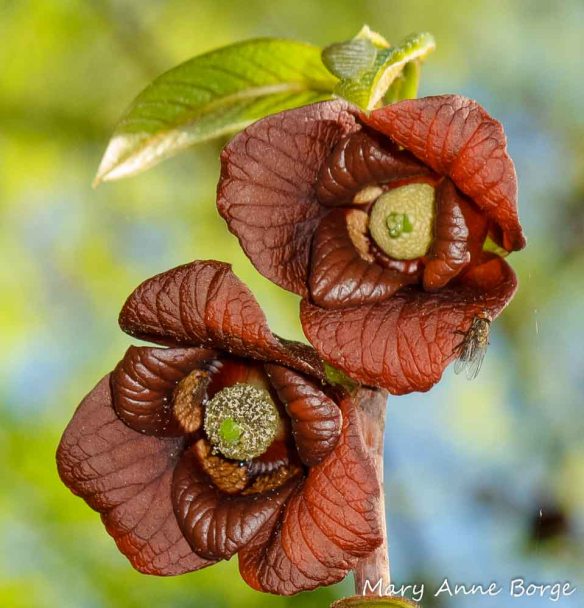 Pawpaw (Asimina triloba) flowers with a fly, a possible pollinator

Pollination is just one service these insects perform. Their larvae decompose and recycle the flesh of dead animals, a public sanitation function they share with vultures that is very important in helping to minimize the spread of disease.

Pawpaw trees can be found in rich, moist woods in the eastern United States from New York south to northern Florida, west across southern Ontario to Michigan, Illinois, and Iowa, south to Nebraska and eastern Texas. Kentucky State University has a full time research program aimed at developing and refining methods to cultivate Pawpaw as a viable commercial crop. 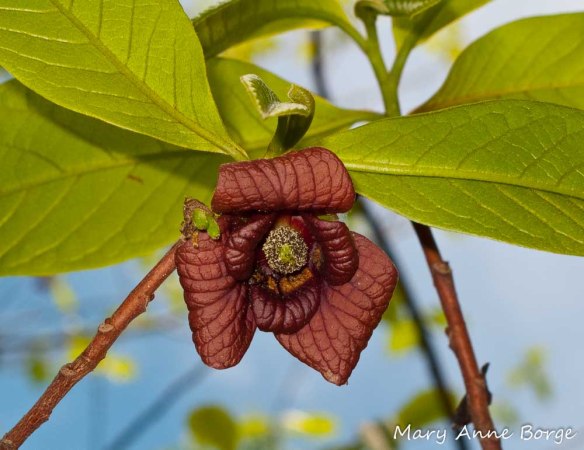 Beresford-Kroeger, Diana. Arboretum America: A Philosophy of the Forest. 2003

10 thoughts on “Benefits of Pawpaws”