As I started down the path through the meadow, I heard a ‘Chip!’ call to my left, then a ‘Chip!’ call to the right. Then another ‘Chip!’ to the left, followed by a ‘Chip!’ to the right. This call and response was repeated several times until I finally spotted the source of half of the duet, a male Indigo Bunting perched on New York Ironweed (Vernonia noveboracensis). Indigo Buntings often use this vocalization if you are near their nest, even if you are still as far away as 30-40 feet (9-12 meters).

Indigo Buntings need edge habitat, like an open field or meadow near a woodland, or a woods opening. They nest fairly low to the ground, usually at a height of at least 2-3 feet (.6 – .9 meters), but not more than 10 feet (3 meters) above ground. They require a dense cover of shrubs or brambles for their nesting site. The female Indigo Bunting makes the nest, weaving the structure from plant materials, including leaves, twigs, bark, and stems, possibly wrapping it with spider web, and lining it with softer grasses, mosses, rootlets, hair, down, or the fluff often attached to seeds.

Male Indigo Buntings need a high perch from which they can survey their territory and ward off encroaching competitors, which explains the need for the nearby trees. They sing to advertise their presence and ownership of their turf. The song often consists of several paired notes, sung repeatedly in rapid succession.

The male I saw on this visit started to sing, then flew off about 40 feet (12 meters) from his original position, continuing his song from his new grass perch. He was closer to me, and sang to draw my attention to him, presumably to distract me from seeing his partner so she could return to the nest undetected. His ploy almost worked, but I did catch a glimpse of her peeking out of a patch of blackberry brambles, about 30 feet (9 meters) away and almost out of my range of vision when I looked directly at the male.

On several visits to the meadow, I caught glimpses of the female, but she was always on the move. Each time I saw her she had food in her mouth to take back to her offspring. Like most birds, Indigo Buntings require a lot of protein in their diet, especially when they are young. The meadow offers plenty of grasshoppers, caterpillars, beetles, aphids and other insects and spiders to fill that dietary need. To round out the menu, berries and seeds are made available by blackberries, goldenrods, asters and other meadow plants. There is no shortage of fresh, local, organic food available for foraging nearby!

On one visit, a female and I finally had a close encounter. She was hiding in a blackberry bramble near the trail, with an insect in her beak, as usual.

As I watched, she gradually moved to a more open spot,

stayed for a few minutes, 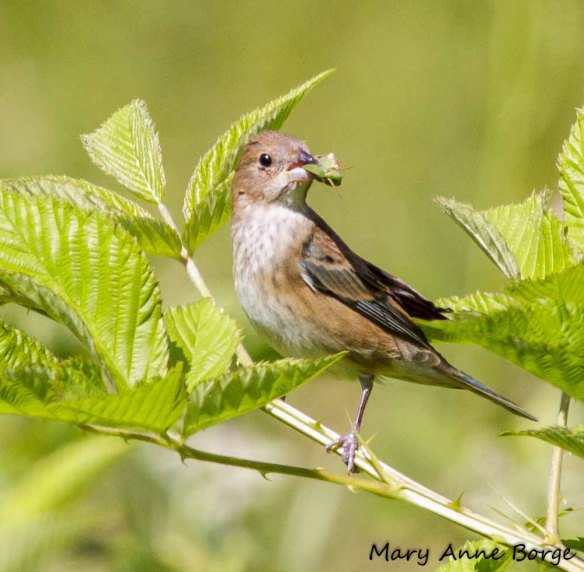 then disappeared into the brambles to feed the kids.

The Cornell Lab of Ornithology All About Birds

15 thoughts on “Indigo Buntings – Living on the Edge!”