I saw my first Northern Prickly-ash (Zanthoxylum americanum) on a walk through the woods in winter. The plentiful prickles along the branches and trunk

and the unusual fruit caught my eye. 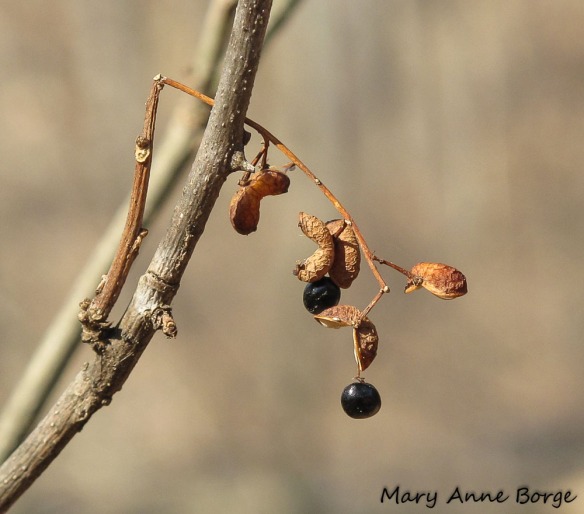 Northern Prickly-ash is certainly prickly, but it isn’t an Ash at all. It does have compound leaves that resemble those of the Ashes (Fraxinus species), but that’s just a superficial resemblance.  Based on the structure of its flowers, Northern Prickly-ash has been classified as a member of the Rue (Rutaceae) family of plants, which is also called the Citrus family.

Like other members of the Rue family, Northern Prickly-ash’s foliage is covered with glands that are fragrant when crushed, emitting a somewhat lemon-like scent. Northern Prickly-ash blooms in spring before its leaves emerge, with male and female flowers usually on separate plants. The flowers are tiny, but they are fragrant, and attract a variety of bees and flies to visit.

By June, if the flowers were successfully pollinated by their visitors, a Northern Prickly-ash with female flowers will have fruit. Bobwhites, Red-eyed Vireos and Chipmunks are among the animals that eat the fruit.

While the fruit looks like a berry, but it is actually a follicle, a dry (not fleshy) fruit that splits open along a single seam. The fruit is green in early summer.

On its way to fully ripening it turns red. 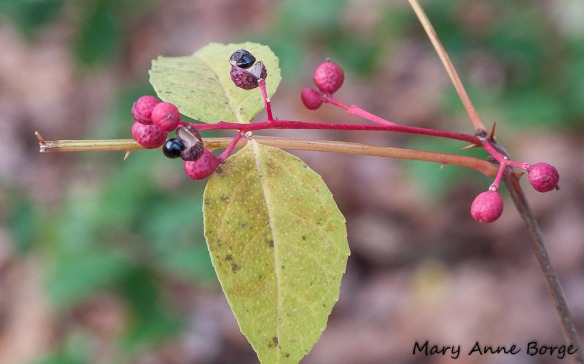 By late fall or winter, the follicle ripens, turning brown, then splits open to reveal the seeds, usually one seed, or at most two per follicle.

Not many insects eat the foliage of Northern Prickly-ash. The leaves contain toxic chemicals (furanocoumarins) that are a deterrent to herbivores. But the caterpillars of Giant Swallowtail butterflies specialize on the leaves of the Rue family members.  They have evolved to be able to ingest the toxins and sequester them in their bodies without experiencing any harmful effects.  Throughout the Giant Swallowtail’s life, from caterpillar to pupa to butterfly, these toxins protect them from being eaten by predators.  This is the same type of relationship that Monarch butterflies have with Milkweeds (Asclepias species).  Monarchs have evolved to specialize on Milkweeds as the only food their caterpillars can eat in exchange for the protection the plants’ toxins give them.

Plants and people have more in common than you might think. Both have mutually beneficial relationships with some fungi and bacteria (think of the good bacteria in your digestive system, and edible and medicinal mushrooms), and adversarial relationships with others that may cause disease.  Many plants have evolved to produce chemical compounds to defend against the predatory fungi, bacteria or microbes that might invade their tissues.  Sometimes those chemicals can also be beneficial to humans in treating diseases with similar causes.

Northern Prickly-ash is native as far north as Quebec and Ontario, and south as far as Oklahoma, Louisiana and Florida, although it is rarer in the southeastern United States. It prefers moist well-drained soils, and can tolerate full sun to part shade.  Northern Prickly-ash can be found on stream banks and in wet woods, sometimes creating a thicket by reproducing through underground runners.

Winter is a good time to look for Northern Prickly-ash.  Take a walk and see if you can find its distinctive prickles and fruit.

Milkweed – It’s Not Just for Monarchs

Black Cherry – For Wildlife, and People, too!