Common Hackberry (Celtis occidentalis) is a tree whose ridged, warty bark makes it easy to recognize in any season.  It may be easiest to spot in winter, since there are fewer leaves to distract from Hackberry’s distinctive outerwear.

Look for Hackberry on a winter day that’s a little warmer than normal, and you might be rewarded with a glimpse of one of the butterflies that are among Hackberry’s known associates, the Mourning Cloak and the Question Mark.

Question Mark butterfly. It is named for the white markings on its wing.

Both of these butterflies survive the winter as adults, spending most of the time sheltering in dry accommodations such as under loose bark, in a woodpile, or in a crevice or hole in a tree.  The butterflies are able to produce an anti-freeze-like substance that keeps them from succumbing to the winter cold.  They are mostly inactive during the winter; they rarely eat and don’t reproduce.  But they may venture out on a warmish winter day to look for a snack of minerals from rotting fruit, dung, sap or mud puddles.  When you are a butterfly that wakes up from a winter nap in northern latitudes, you have to have a flexible diet.  Not many flowers are blooming to offer nectar during the cold winter months.

While these butterflies may be found anywhere in the woods, in the warmer months when reproduction is on their mind, they are known to associate with Hackberry trees because they are one of the species whose leaves the caterpillars of both these butterflies can eat.  In addition to Hackberries, Mourning Cloak caterpillars use the leaves of a variety of trees, including willows, elms, birch, cottonwoods and aspen.  Question Mark caterpillars can also eat elm tree and nettle leaves.

In the spring and summer months, you may see additional butterflies whose caterpillars specialize on Hackberry leaves.  These species depend solely on Hackberries for their survival.  They include the curious looking and aptly named American Snout, the Tawny Emperor, and Hackberry Emperor.

The American Snout drinks nectar in addition to seeking out minerals.  Its long ‘nose’ is thought to have evolved to look like the stem of a leaf, which together with the cryptic coloration of its wings helps this butterfly to hide in plain sight, disguised as a dead leaf. 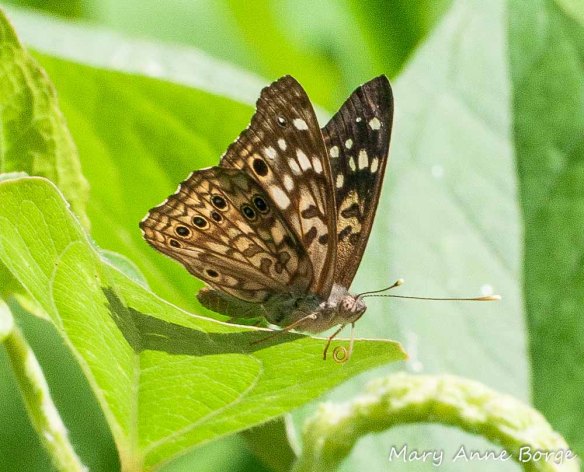 Because Tawny and Hackberry Emperors rarely nectar, you are most likely to encounter them in or near wooded areas where their caterpillar food is present.  Their diet of minerals from mud, sap, and rotting materials such as fruit and dung is similar to that of the Mourning Cloak and Question Mark.  Hackberry Emperors also find human sweat to be a good nutritional source.  It is the species of butterfly I have most often seen landing on people to get a quick snack! 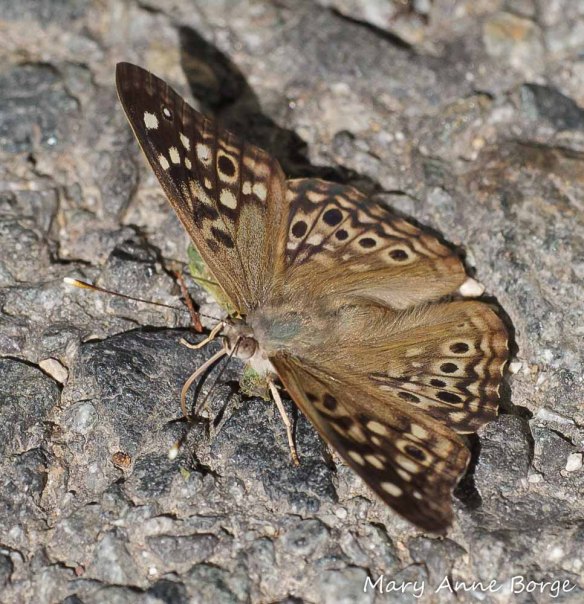 Hackberry Emperor getting minerals from soil and rocks. 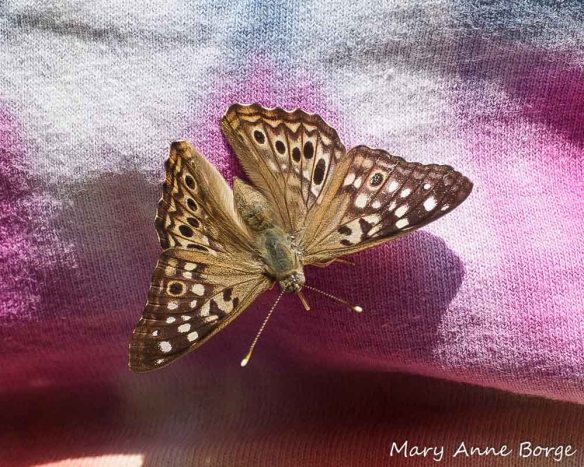 Hackberry Emperor getting minerals from the sweat on someone’s shirt! 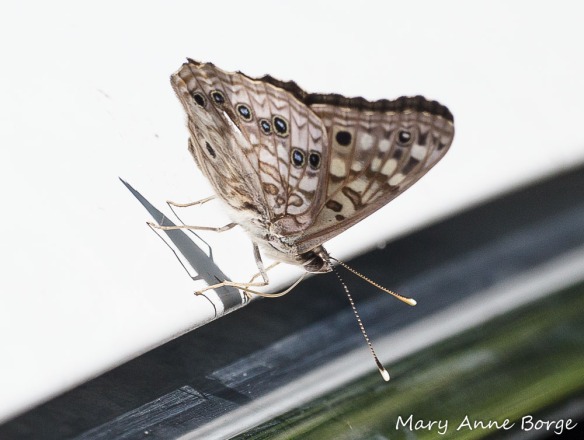 Hackberry Emperor getting minerals from the hood of a car. Is it the paint or the dirt?

Not every caterpillar will live to become an adult butterfly, since there are many predators to elude first.  The Hackberry Emperor caterpillar in the photo below has fallen victim to a parasitic wasp. Her larva will develop inside the caterpillar, consuming its insides until the wasp is mature enough to emerge.  As you might expect, the caterpillar is unlikely to survive. 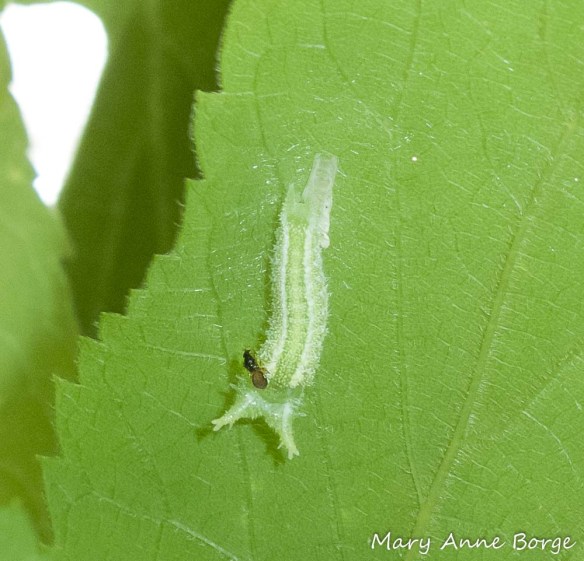 Several moth species including the IO Moth, and White-marked and Banded Tussock Moths also use Hackberries, among other woody species, as food for their caterpillars. 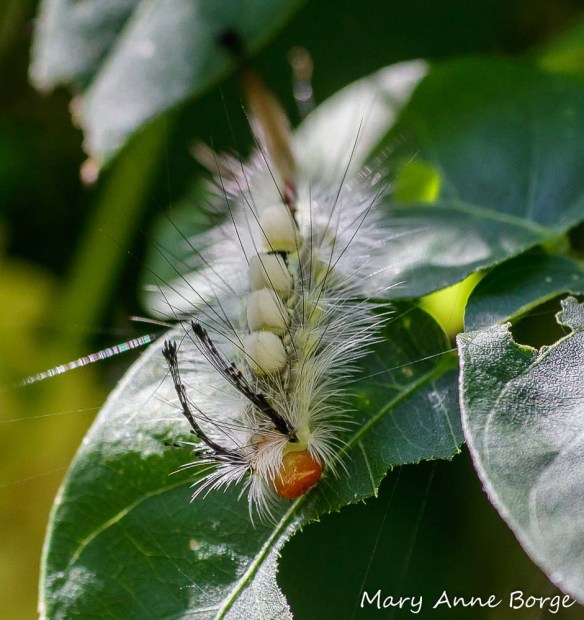 The round growths on the leaves in the photo below are galls called Hackberry Nipple Galls.  They are caused by a type of true bug in a group called psyllids, or less appealingly, jumping plant lice.  The insects develop inside the galls and emerge when they mature. 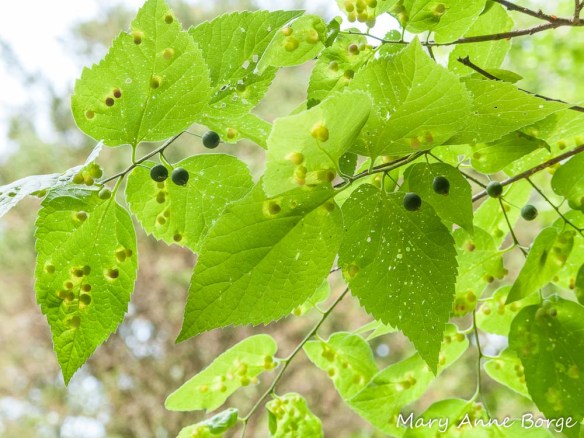 Many of these insects are a potential bounty of food for birds.  I watched the young Tufted Titmouse below and its nest mates forage for food and play among the branches of a mature Hackberry. 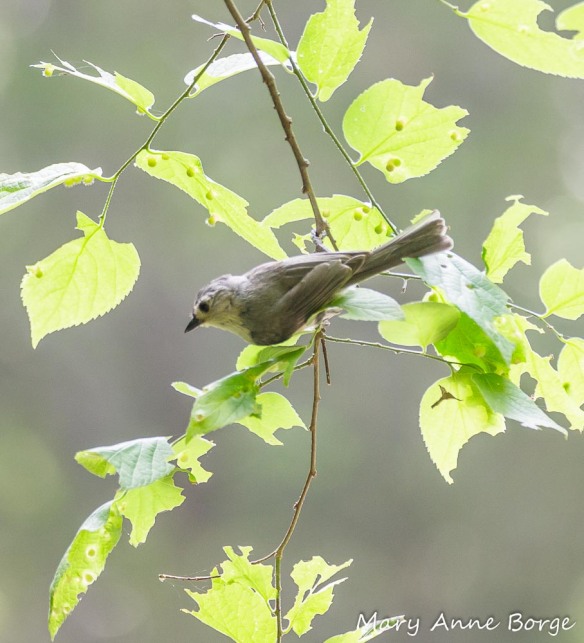 Hackberry’s somewhat inconspicuous flowers are pollinated by the wind, blooming at the same time that the leaves are beginning to emerge.  Hackberries are monoecious; they have some flowers with just male reproductive parts, others with just female flowers, with both types of flowers on the same trees.  In the photo below, both male and female flowers are present.  The female flowers have two stigma-tipped styles that are spread in a ‘v’ shape projecting from the flower. (They look like forceps, or they also remind me of the arcade games where you have to use a similar looking tool to retrieve a toy from a glass enclosure.)  The male flowers have five or six anther-tipped stamens that barely project beyond the enclosing sepals.  A tree may even have some flowers with both male and female parts.  Pollen is carried by the wind from the anthers and deposited on the stigmas.

Common Hackberry (Celtis occidentalis) flowers. The female flowers have 2 styles spread in a ‘v’ shape. The male flowers each have 5-6 dark-colored anthers.

If the flowers are pollinated, a fruit called a drupe is produced.  A drupe is a fleshy fruit that has a stony enclosure around the seed inside, like a peach.  The fruit ripens in fall, but may persist into winter. Birds as diverse as Mockingbirds, 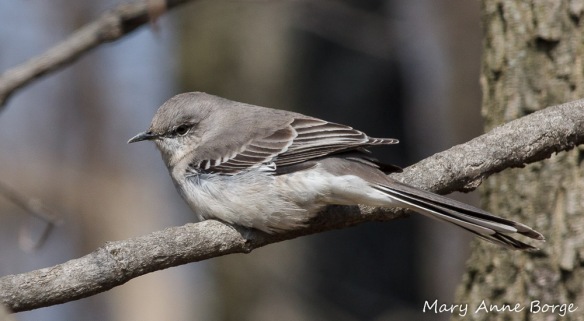 A pair of Wood Ducks

Raccoons and squirrels are among the small mammals who eat the fruit.

A raccoon peaking out from its home.

Common Hackberry’s natural habitat includes wooded floodplains and hillsides, and can grow to a height of about 115 feet (35 meters).  It is native in Manitoba, Ontario and Quebec provinces in Canada and most of the United States, from New Hampshire to Montana in the north, south through Utah, New Mexico and east to Florida, except Louisiana, although it is less common in the southern part of its range.   It is also often used as a street tree.

There is a related species, Sugarberry (C. laevigata) that is native in the southern half of the United States and in the western states.  Dwarf Hackberry (Celtis pumila) is native in Ontario, Michigan, and from New Jersey west to Kansas, and south from Texas to Florida.  The butterflies that specialize on Hackberries use these species, too!

43 thoughts on “Hackberry, Butterflies and Birds”