It’s well into December, and American Witch-hazel (Hamamelis virginiana) is still in bloom, brightening our winter shade garden and the woodland understory. 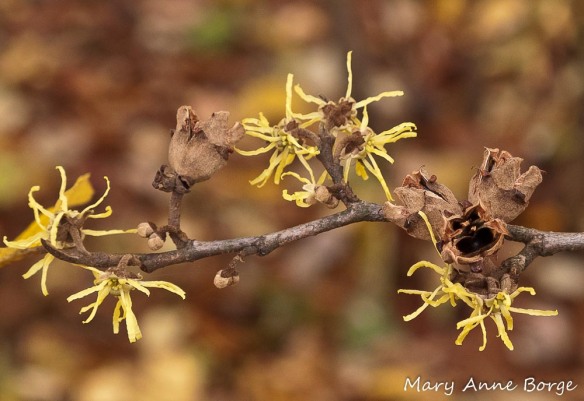 The flowers are arranged in clusters, usually in threes.  Each flower has four long, spidery, streamer-like petals.  In the center of the flowers, you can see other flower parts that also come in fours.  Four stamens (male reproductive parts) are tucked in between the petals, protected from below by the four sepals that protected the flower until it was ready to open.  The pistils (female reproductive parts) can be seen in the very center of the flowers. 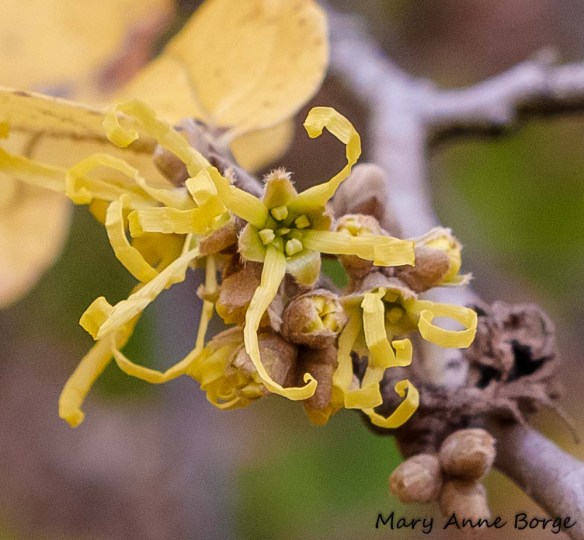 Witch-hazel (Hamamelis virginiana) flower beginning to bloom. The anthers have not yet open to release pollen. 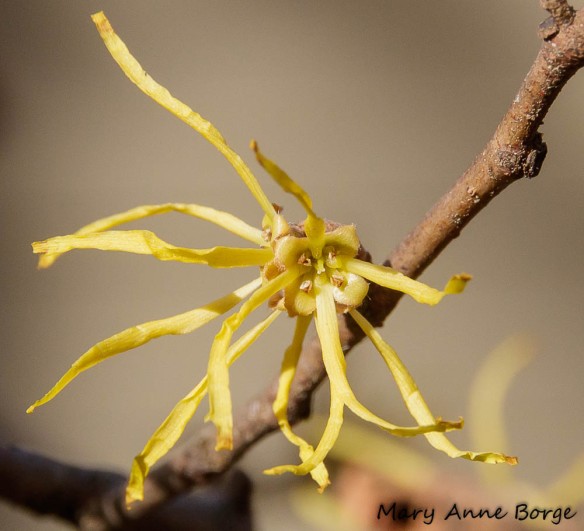 Even though Witch-hazel blooms when the weather is cooler, it relies primarily on insects for pollination.  Various fly species are the most frequent flower visitors. This is not too surprising, since many flies are active at fairly low temperatures. Several species of bees, small wasps, moths and even beetles have also been documented as potential Witch-hazel pollinators.  They are attracted by the color of the petals, a mild (to me, at least) fragrance, and the fact that there is not much else in bloom.  If the weather doesn’t cooperate and not enough insects are active, witch-hazel is capable of self-pollination, although cross-pollination with the assistance of an insect is preferred, since this produces a stronger genetic result.  Fertilization is delayed until spring, after which fruits begin to develop.

Even during and after our first snowstorm of the season with about 5 inches of wet snow, these tough little flowers hung on, looking as fresh as ever.

Witch-hazel (Hamamelis virginiana), still blooming in spite of the snow.

Such tenacity can pay off.  While looking at the flower photos that I took during the storm, I found a moth taking refuge on a branch near the flowers, waiting for the temperatures to warm up enough to become active and search for nectar.  That little moth could make a nice snack for a Chickadee and Titmouse searching the seemingly baren winter branches. 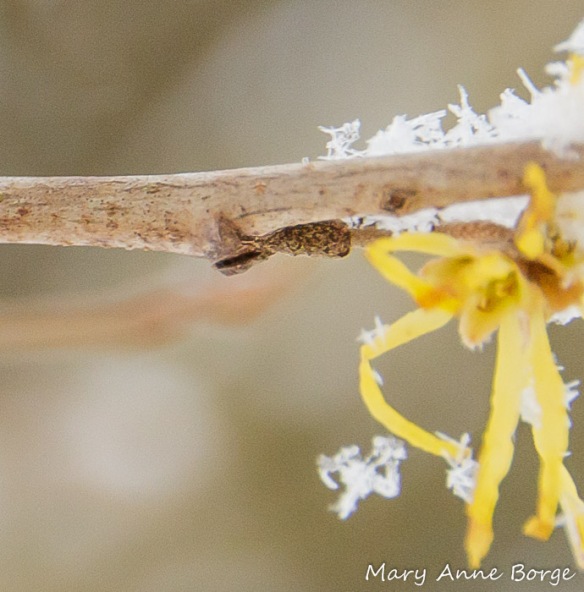 A moth sheltering on Witch-hazel (Hamamelis virginiana) during a December snow storm.

The flowers are accompanied by fruit capsules that look like small flowers carved from wood. These fruit capsules are the product of the previous year’s successfully pollinated flowers. 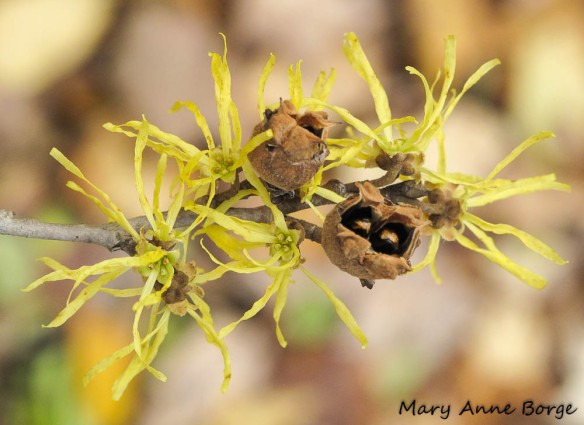 In early October, as the leaves began to turn from green to yellow, the fruit capsules and flower buds were still tightly closed.  As this season’s flowers began to bloom, the fruit capsules opened explosively, ejecting the seeds several feet away.  The seeds will wait through two winters before they germinate.  Ruffed Grouse, Northern Bobwhite, Wild Turkey, as well as some rabbits and squirrels eat the fruit.

Witch-hazel is well-known for its use as an astringent and anti-inflammatory agent.  You may have a bottle in your medicine cabinet now.  Witch-hazel is used to treat wounds and hemorrhoids, and it’s an ingredient in some cosmetics.  It acts as a styptic to stop bleeding, and reduces bruising and inflammation.  It also helps reduce the chances of infection.

It’s not by accident that Witch-hazel has these properties.  The tannins found in the leaves and inner bark of Witch-hazel provide these benefits.  Witch-hazel produces these compounds as protection from herbivores, and to inhibit the growth of fungi and bacteria that might be harmful to the plant.  Fortunately for us, humans can also benefit.

The tannins are not 100% successful in deterring herbivores.  There are some insects that specialize on Witch-hazel as their source of food, including the caterpillars of several moth species.  There are also two aphid species that produce eye-catching galls. (A gall is a growth that is the plant’s reaction to being used as a source of food and shelter by an organism such as an insect, fungus or bacteria. Galls seldom cause any harm to the plant, and they may stimulate the plant to produce more protective chemicals.) 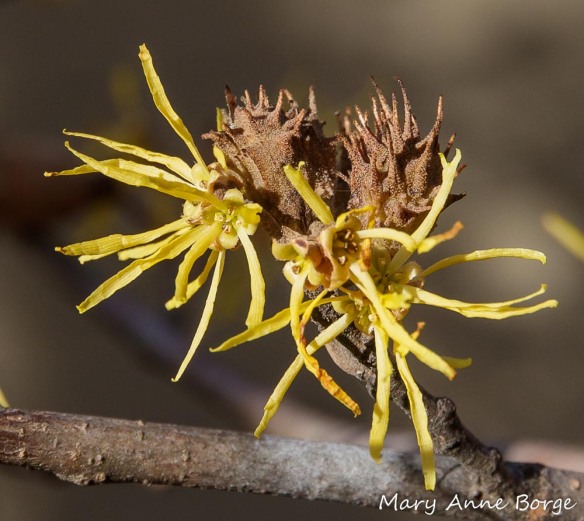 The spiny witch-hazel bud gall aphid (Hamamelistes spinosus) is named for the appearance of the gall the plant produces from bud tissue in response to being used as a home by the developing aphids.  At this time of year, the gall looks woody.  At a quick glance it might be mistaken for a fruit capsule, until you notice the spines.

Earlier in the season, the spiny witch-hazel bud gall is green and fleshy.

It’s interesting that there are so many ants swarming this gall.  If the gall were open and the aphids were available, the ants would likely be milking them for delicious ‘honeydew’ (excrement).  But the aphids have not reached maturity, they are still safely encased inside the gall.

Ants are often very beneficial to plants.  They disperse the seeds of many spring blooming wildflowers, for one thing.  Ants also provide protection from herbivores like caterpillars who might eat a plant’s leaves, flowers or buds, because other insects are an important part of an ant’s diet.  Plants often emit a chemical call to arms to alert ants and other predators to the availability of insect food. The plant may offer an additional reward and reason to stick around in the form of nectar not associated with flowers (extra-floral nectaries) or resins, specifically aimed at payment to their protectors.

It’s a mystery to me what caused the ants in this photo to visit.  Maybe this Witch-hazel detected the presence of a new generation of insect eggs (not visible to me), and sent out a distress signal to the ants.  Any other ideas?

Pristine leaves unfold in spring, but they are often quickly put to use as food and shelter by another aphid (Hormaphis hamamelidis), the Witch-hazel leaf or cone gall aphid.  This gall resembles a cone, or a witch’s hat.

Both of these aphids spend part of their life cycle on birch trees.

Witch-hazel branches have been used as divining rods to find underground water sources, a practice sometimes referred to as ‘water witching’.  In theory at least, the branch would point or bend towards the ground when it detected water.  The ‘Witch’ in ‘Witch-hazel’ is based on an Anglo-Saxon word, ‘wych’, that means ‘bending’.

Witch-hazel is a multi-stemmed shrub that can grow to a height of about 16 feet (5 meters), and can tolerate shade.  It is native in the Eastern half of the United States, and Ontario, Quebec, New Brunswick and Nova Scotia in Canada.

Enjoy these bright blossoms while they last! 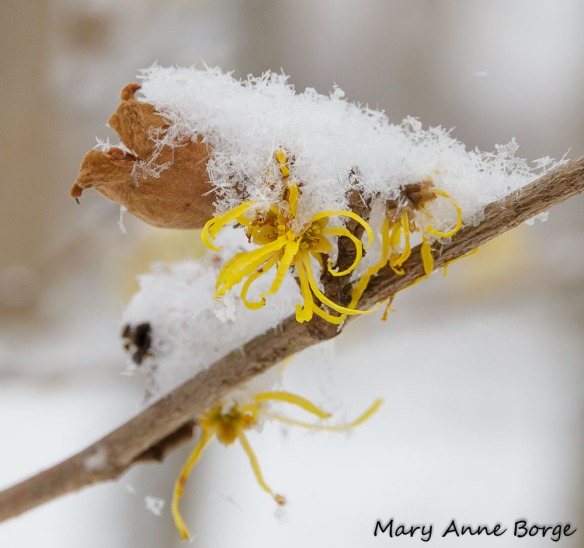 A Carpet of Spring Beauty, Woven by Ants!

Will Work for Food – Extra-floral Nectaries

Foster, Steven; Duke, James A.  A Field Guide to Medicinal Plants and Herbs of Eastern and Central North America.  2000.