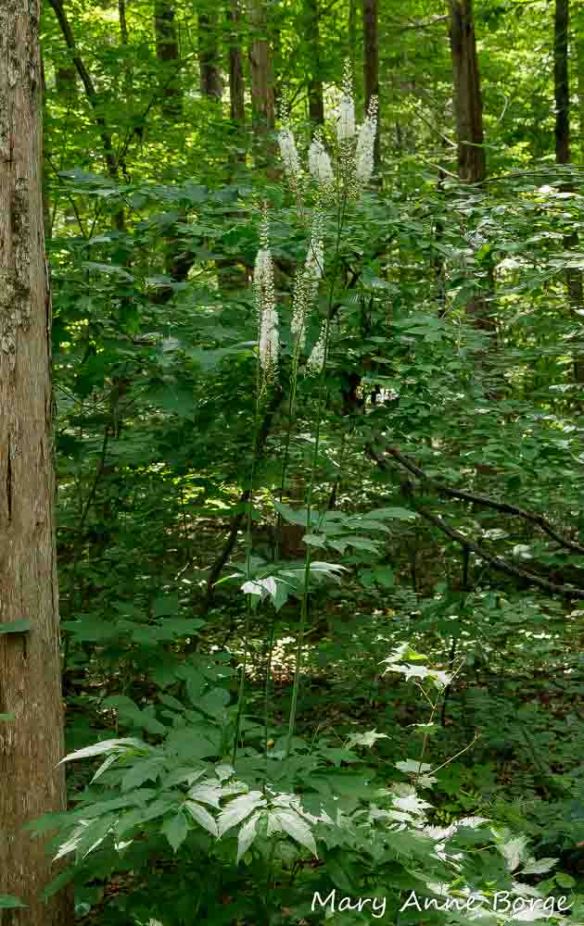 The spikes of white flowers seem to glow even in the dark, begging to be called Fairy Candles, one of the other common names by which Black Cohosh is known.

Black Cohosh flowers are arranged in long narrow clusters called racemes, blooming from the bottom of the flower stalk to the top. Each individual flower looks like a pom-pom, formed by an aggregation of many stamens (the male reproductive parts) surrounding a single pistil (the female reproductive part).

Black Cohosh depends on the assistance of animals to achieve pollination. The flowers are visited by many species of insects whose bodies may come in contact with pollen dispensed from anthers at the tips of the stamens.  Some of that pollen may adhere to the insect’s body.  When the insect moves to a flower of another Black Cohosh plant and brushes against the flower’s stigma (the receptive part of the pistil), then Black Cohosh’s pollination goal is achieved.

It’s not an accident that insects visit the flowers. Plants and animals have evolved together over centuries to depend on each other.  About 80% of flowering plants depend on animals to carry their pollen to other plants of the same species, helping them achieve successful cross-pollination.  In exchange, many animals depend exclusively, or for at least part of their diet, on plants.

The most common food enticements that plants offer to flower visitors are nectar and pollen. Many insects visit flowers for nectar, but some are also interested in eating pollen, and in the case of bees, harvesting it to bring back to their nests to feed their larvae.

Black Cohosh has evolved a strategy of offering pollen, but not nectar, to entice potential pollinators. Plants evolve to be as efficient as possible, trying not to expend unnecessary resources.  Black Cohosh is able to attract enough visitors to its flowers by offering them pollen only.

Insects want to eat pollen and plants want insects to transport their pollen to another plant of the same species. If this sounds like a potential conflict of interest, it is.  Only about 2% of pollen is actually used for pollination.  Potential pollinators or their offspring eat much of the remaining 98%.

Bumble Bee visits were the most brief. They stopped for just a few seconds per plant before moving on to another.  It may seem counterintuitive, but this may make Bumble Bees the most successful of Black Cohosh’s cross-pollinators, since they are the most likely to move the pollen to a different plant.

A Flower or Syrphid Fly (Toxomerus geminatus) dined on the flowers’ pollen.

The Tumbling Flower Beetles were joined by at least three species of Longhorn Beetles, the Banded Longhorn Beetle (Typocerus velutinus), and two others, Metacmaeops vittata, and Analeptura lineola. 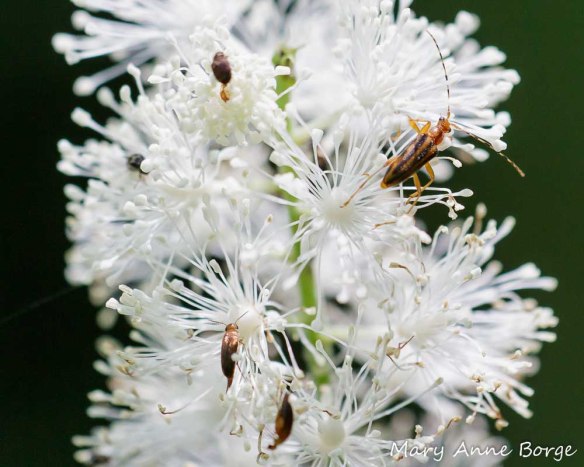 For an insect, visiting Black Cohosh flowers is not without its risks. Predators like the perfectly camouflaged Crab Spider in the photo below may be lurking in the shadows, waiting for an unwary victim. 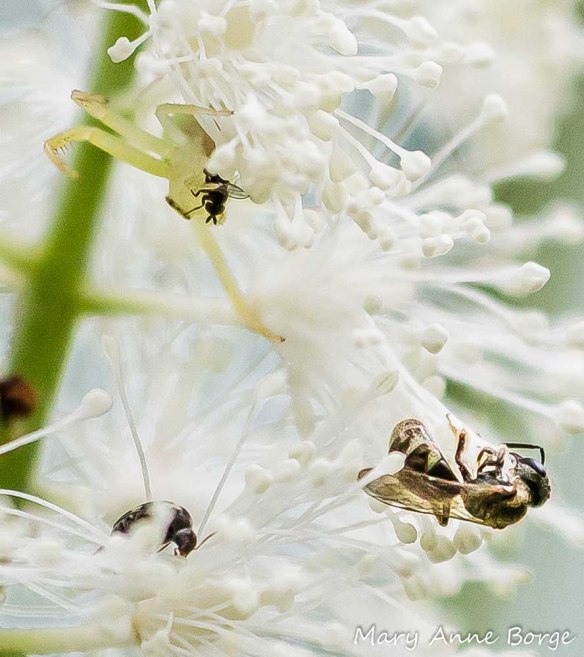 Black Cohosh is native primarily in the eastern United States and the Canadian provinces of Quebec and Ontario. It grows in rich, moist woods, in ravines and on slopes.  Its height can range from just over two feet (.7 meters) to as much as eight feet (2.5 meters).  Black Cohosh will light up a shade garden, blooming from late June through early August.

Who uses Black Cohosh? Insects do, including bees, flies, beetles, ants, and butterflies; spiders and other predators of the insects feeding there do, and even people use it, for medicinal purposes and for the beauty it brings to a garden.

Marshall, Stephen A. Insects Their Natural History and Diversity. 2006.

11 thoughts on “Who Uses Black Cohosh?”